We arrived at the Athens airport at 1020 am. We found our tour guide with the Gate 1 sign and she gave us instructions about our next flight to Santorini. Our flight to Santorini wasn’t until 3 pm so we had a lot of time. It was so boring. I was also getting so cranky. I was tired of traveling and I wanted a shower. We got a sandwich and shared it and waited until we could go to the gate.

We finally went to our gate around 2 and our flight was delayed by a half hour. It was horrible. I was so tired. We were sleeping in the chairs. We used the internet. They had free internet for one hour in the airport. So not as good as Canada….but hey at least you got some free time. We finally got on the plane and we sat on the plane without moving for a long while. When we took off we both fell asleep. We arrived in Santorini around 445 pm.

We took a bus to our hotel and got our travel documents for Santorini. It had a map and a list of excursions we could do and other things we could do on our own. We decided one of the excursions we wanted to do was snorkeling. Once we got checked in we showered. The shower felt so good after all the traveling. Here’s some pictures of Hotel Hermes. 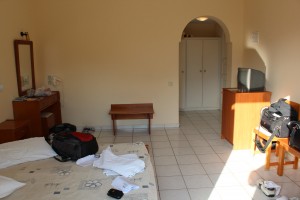 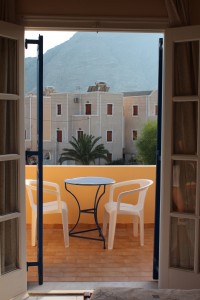 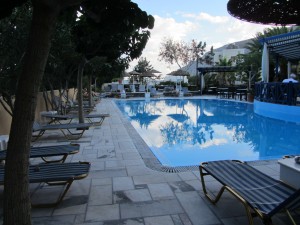 Then we left the hotel to find food. We saw a little field with 2 goats and an old woman just sitting there. The walk to the beach and main street from our hotel was about 5 minutes. The beach was black rock and pebbles instead of sand. I think because Santorini is a volcano. 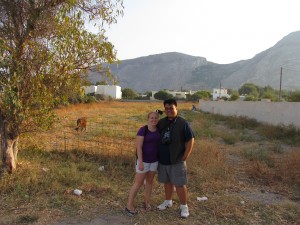 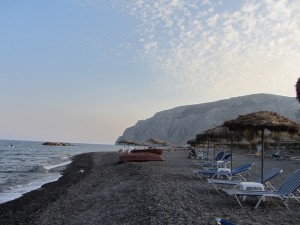 We walked around trying to find a place to eat and there were so many choices. We decided on a place that had a bunch of cats hanging around at it. The cats were cute. Our first meal in Greece was a mixed grill for two that included potatoes, pork on a stick, meatballs, sausage, chicken and lamb. 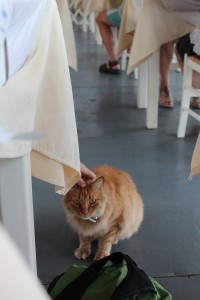 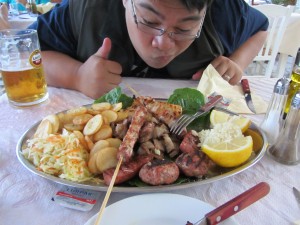 It was soooo good. We walked around more after dinner to pick up some water since we can only drink bottled water. I found a Dr Pepper that I plan on having for breakfast tomorrow!! 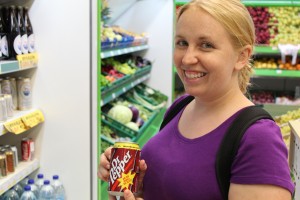 On the walk back to the hotel we took a different way and ended up getting lost. We had to ask another hotel how to get to ours. Luckily we were not too far away and we made it back. I think the reason we made it was because of this church…it was our landmark. 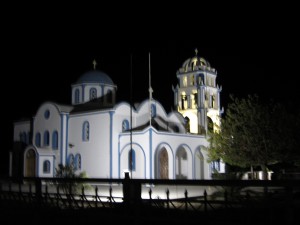