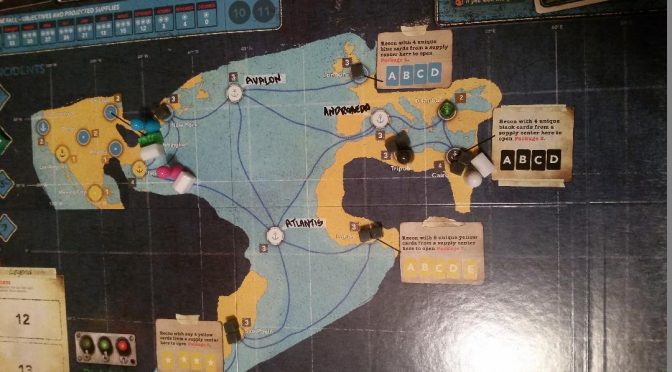 We have been waiting over a year for Season 2 of Pandemic Legacy. If you don’t know anything about the board game Pandemic, it’s awesome and you should check it out. You could also go back in the gaming section of this blog to read about the base game and see my attempt at blogging about Pandemic Season 1. We have been playing Pandemic with our friends Cassie and Ian for probably over 4 years now. We went through Season 1 together and loved it. We also feel like we have an awesome team, so here is my attempt at recounting our Pandemic Legacy Season 2 story. And who knows, maybe we will start vlogging like we always joke about?!

***If you just want to hear an awesome (but confusing if you have no concept of the game) story keep reading but if you’re wanting to play the game this will have spoilers!! Starting….Now.

Season 2 occurs 71 years after Season 1. The world has been mostly destroyed by the plague and now we are just trying to keep afloat. Many people live in the sea on floating stations called Havens. The people in the Havens work to give supplies to the mainland. As you can imagine something has went wrong and we have lost contact with cities on main grid so now we have to send some people out to figure out what’s wrong so we can save humanity.

The whole premise of the game is different. It used to be our main goal of the game was to find cures for diseases. Now the disease is incurable and we are trying to keep supplies moving. If a city becomes devoid of supplies it becomes at risk of being taken over by the plague. So before we dove into Season 2 it was recommended that we played a practice game (or as many practice games until we felt comfortable).

So before our first practice game we had to name our 3 Havens on the map. At first it is surprising at how few cities are available on the map compared to the previous Pandemic games where we had access to the whole world. Now we just have a few cities on the East coast of North America, one city in South America, a few in Africa, and a few in Europe. The 3 havens are in the sea and we named them Avalon, Andromeda, and Atlantis. 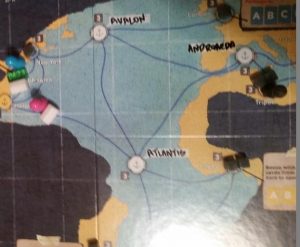 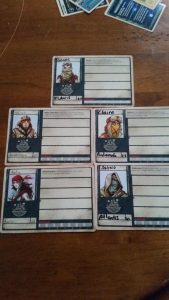 For our Practice game Ian played Newt, a 30 year old Radio Operator from Andromeda. The Radio Operator is able to spread supplies to other players anywhere on the board without being in the same city as them. Cassie played Aofie, a 28 year old Administrator from Avalon. The Administrator is basically the Dispatcher from the original Pandemic. She can move another player to any other player on the map. And Cassie is the ultimate dispatcher so it’s only natural that is her character. Don played Goods, a 27 year old Farmer from Atlantis. The Farmer can immediately deliver supplies for free after making them. We think he may be the equivalent to the Medic. I played Claire, a 27 year old Laborer from Andromeda. I am basically the Scientist from the base game because I need one less card to build a supply center, but I also need 2 supply cubes.

We read the journal entry for the practice game and put out our objective of building 3 supply centers on the board. The objective feels similar to finding cures like in the original game, but now it’s about keeping cubes on the board because they represent supplies (safety) whereas before we wanted less cubes on the board because they represented disease (death). So it kind of felt like we were working backwards. We also had to get used to cities being in the infection pile multiple times, whereas before cities were only in there once so we could gauge when a city would come up much more easily. Anyway, it was difficult but we ended up being able to build the 3 supply centers and win the game.

Now it was getting late and the question was do we stop, play another practice game, or just dive in? We decided to go for it and play the first episode or January as the game calls it. Now things get more real because our characters could be hurt or even killed by effects in the game. In the practice game, nothing could happen to our characters and certain actions were not allowed to be taken. A character can be hurt in the game if a city loses all of it’s supplies, the plague moves into the city, and the character is unable to get out before their next turn.  Then the character gains an exposure and if you notice on the bottom of the character card there are 7 silver boxes. These boxes will be scratched off one by one with each exposure. The scratch off could reveal nothing and your character is lucky or it could reveal a scar which would mean you would have to add a handicap to your character. In the worst case scenario an exposure could reveal a skull and your character dies. These 7 scratch off boxes are randomized so we have no idea what will happen.

So we started the January game feeling pretty nervous. We now had the objective of building 3 supply centers as before but then also performing the Recon action in North America. This meant we would have to build a supply center in Washington and then later bring 3 more blue cards there to Recon. We read the journal entry and found out that supplies were dwindling and cities were projected to fall within a year so we needed to do something. We also found out about something called the Hollow Men that raid surviving cities. Don decided he wanted to switch up characters so he played Shino, a 50 year old Instructor from Atlantis. The Instructor is basically the Researcher from the original game. He can give any player in his location any city card. When we started the game we immediately had cities losing supply cubes fast and plague cubes popping up. We also had a clear path to making a supply center in Africa and Washington quickly, so we did that. Throughout the game we realized the Dispatcher was essential to getting players out of cities before their turn so they would not gain an exposure. We also realized it was beneficial during the set up of the game to not put any supply cubes in the havens at the beginning because they could not be affected by infection cards. This allowed more supplies on cities that could be infected. Throughout this first game it was a constant struggle. We were torn between letting cities get out of control with plague cubes and going right to the objective. This was especially hard because Ian had 4 yellow cards to make the 3rd supply station (with 1 more card) and he also had 3 blue cards to do the Recon action in Washington. We had a plan; we could see victory. Victory did not happen though because we ran out of plague cubes and had too many incidents. We were defeated, but nothing had happened to our characters and we had no idea what plague cubes meant for the continuation of the game so we decided that instead of calling it a loss we would call it a second practice game.

Now it was really late, around 12:30 am. We were all tired but I could tell we didn’t want to give up entirely. So we decided to try again. Maybe it would be terrible and something bad happens immediately so we just quit and go to bed. Or maybe we win. We decided to stick with the same characters. This time around we really were able to control supplies better; I think this was due to using the Produce Supplies cards more freely.  I think in the first 2 games we were hesitant to use these because we didn’t know how many we had so we were holding onto them. We used them all the time in this game, but we never used the System-Wide Production ability. Things were working in our favor and we were making good decisions. We were able to get through the game and win. It was hard though because towards the end we were on the brink of having players being exposed to the plague and we were also almost out of cards which would also end up in a loss. We had 3 cards left in the player deck when we were able to finish the last objective of the North American Recon. When we finished the objective which also ended the game we were able to open package 1. Package 1 had new city cards and event cards. It also revealed a sticker of the map to add to the board. 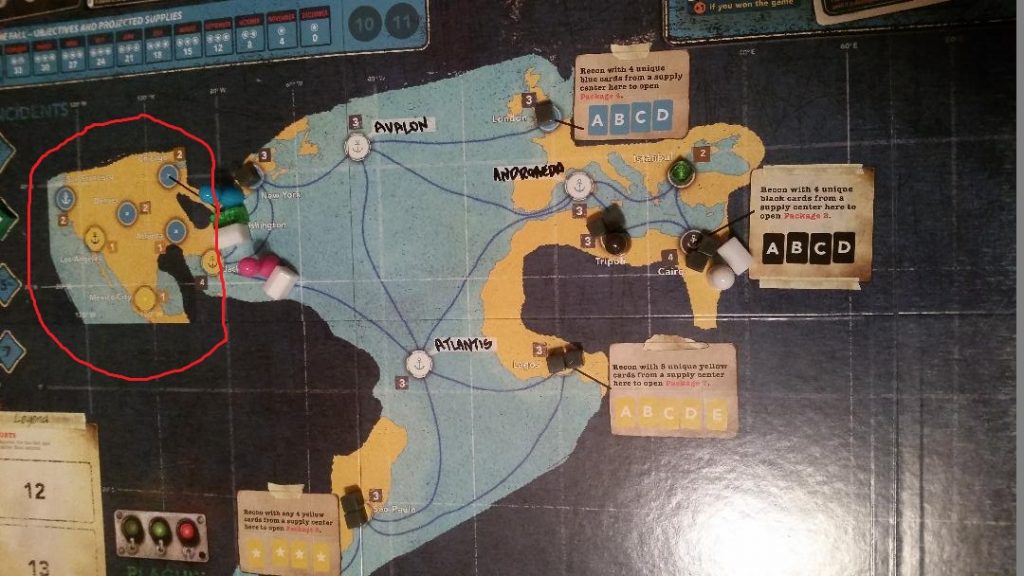 There was now a connection to Chicago and we had “discovered” Chicago. We now have infection and city cards for Chicago to add to the deck. You can notice on the map though there are other cities on the new portion of the map but they don’t have roads or connections to them. We now have a new action where we can Establish A Supply Line by spending 2 supply cubes to actually draw a line from the city we are in to another city. Once a line is drawn to the new city we add those cards to the infection and player deck. Package 1 also revealed another player action of Searching. This means if we come across a city card with a box to scratch off on it and we are in that city we may reveal what the city card says without discarding it. We also revealed more Scar stickers to add to our reserve in case our characters are injured. The last thing Package 1 gave us was an interesting card called an Unrationed Event Card that allows a player to remove all plague cubes from 1 location for free and at any time. Once this card is used though it has to be destroyed.

Our final Game End action was to Spend Production Units. This meant we chose upgrades and this was done by calculating the number of cities on the grid and comparing that to the table shown in the Game End Area. We discovered a new city (Chicago) so we now have 10 cities on the grid. With 10 cities we got 3 production units, but we also got a +1 for winning the game, so 4 units. With these 4 units we can upgrade a character’s abilities, put advantages on city or infection card, or increase the population of a city. It was super late so after a short discussion we decided to make our final upgrade decisions before our next game. One upgrade we are leaning towards is the Courier character ability which we would add to the Farmer character. This ability allows the character to put supply cubes in an adjacent city.

We were super excited to win. Did we cheat by starting January and technically losing the first round? I don’t think so. We hadn’t done anything in the game like expose a character or use the system production ability that would cause permanent consequences. I’m excited to see what the February game will bring us. Luckily we will start with same amount of supply cubes (36), but from there on out supply cubes at the beginning of the game lessen. Since we won January the game will become slightly harder because we will only get 2 event cards instead of the 4 we started with.

This game is awesome!!