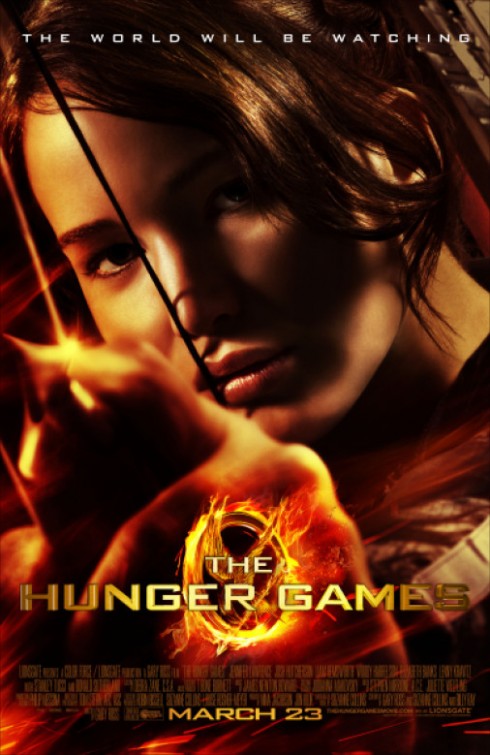 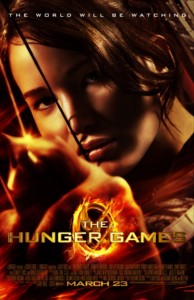 So like many people I’ve been waiting for months for The Hunger Games movie.  The books were great and I was really excited to see how the movie would portray the books.  I’m not usually one to read books and see the movie, usually I just see the movie and forget about the book.  The book is usually way better than the movie and I just hate comparing the two, so this was sort of a new thing for me.  But besides all of  this, my review will have spoilers for the movie and the book, so read at your own risk!

First off I will say the movie is definitely not as good as the book.  The beginning was good with being able to see District 12 and Katniss and Gale hunting.  I think most of these scenes were satisfying.  Although I wish they would have showed a little bit more of life in the Seam.   I felt the relationship between Gale and Katniss was pretty well displayed with it being a bit awkward in that they both were not willing to put forth their feelings.

They did change the part with the mayor’s daughter giving Katniss the mockingjay pin.  Greasy Sae at the Hob gave her the pin.  But I feel changing this didn’t really effect the movie or the story that much. Although I do believe, in the book the mayor’s daughter gives Katniss the pin after she has volunteered for the reaping and it goes into what a mockingjay is.  I guess what they were trying to do was cut down movie time with having to introduce the mayor’s daughter and all of that so some people may be a bit disappointed by the importance of this pin being downplayed, but I think it was fine.

The reaping scene in the movie was probably for me the most moving part of the movie.   You can feel the fear and terror of the kids especially Prim.  Prim was excellent.  You feel all of the emotion of Prim being picked and her older sister volunteering to take her place.  The part was very well done.  I actually felt teary eyed because I got to thinking about what if this were me and my sister? I was surprised to see they didn’t show Haymitch falling around on stage.  After thinking about this I think they decided to wait to introduce Haymitch because people who have not read the book might be confused as to who this person is on stage drunk and falling down.

From here until the games was where the movie kind of flawed.  There were parts I really enjoyed seeing like the scenes with Cinna and Katniss.  I think they focused too many scenes on the training though.  I think one scene of training would have been enough.  I would have liked to see more of the games rather than the training.

The scenes of the games felt very short and not really rewarding.  I don’t know if this would have been different if I didn’t read the book or not.  You didn’t see Katniss dehydrated for a couple of days in search of water. It felt very rushed.  The relationship between Rue and Katniss was there but not nearly like it was in the book.  When Rue died, it was sad but the sadness was nowhere near what I felt when reading the book.  I think they could have spent a little more time developing this relationship.  The moment when it’s announced there could be 2 victors from a district win was also downplayed by Katniss only whispering “peeta” instead of screaming it like in the book.  I know this is small but show some emotion!  She doesn’t seem that excited about this at all.  Of course she finds Peeta easily…I know the movie only has so much time but she barely had to look.  The time spent in the cave with Katniss and Peeta is so short.  I didn’t feel there was a relationship at all.  No connection.  They kissed like twice.  Believe me I didn’t want this movie to turn into a Twilight with 2 different love interests, but I did want to see what I thought the books portrayed.  Katniss and Peeta were supposed to be all lovey-dovey, kissing and making a show for the audience.

The absolute most disappointing part of the movie though was the final battle in the games with the muttutions, Cato, Katniss, and Peeta.  They didn’t have Peeta get bit on the leg.  Peeta was supposed to be bleeding to death and Katniss made a tourniquet to save his life.  Peeta didn’t even look winded.  Peeta is supposed to be near death! They took out the scene with the hovercraft picking them up and Katniss screaming for Peeta while he was being worked on by doctors.  This would have been a very emotional awesome scene….but completely left out.  I wonder why?

Throughout the movie they showed the gamemakers controlling the game.  I thought this was cool.  You didn’t get any of this from the book but I think it would really help someone understand more about the Capital if they were only seeing the movie.

Overall the movie was good.  I wasn’t disappointed too much because I didn’t have high expectations.  I think if you go into this thinking it’s going to effect you as much as the book did you will be extremely disappointed.  I think all of the characters were pretty well portrayed. There wasn’t anyone that I was disappointed in.  I hope in the next movie they elaborate more on the relationships between the characters.  I know I will be seeing the next one! Happy Hunger Games!