For the past 2 years Don has made it a tradition that he takes me on surprise birthday getaways (Montauk, galena)…and this year he carried on the tradition.

Friday after work he picked me up and we started on our way.  We got on 94 and started driving.  About an hour into the drive we pulled into an Arby’s for dinner and got some gas.  He told me we only had about 30-40 minutes left.  I drove since he needed to navigate.  We arrived at Lake Geneva, Wisconsin around 9:45 pm Friday June 24.

He had booked us a room at Maria’s Bed and Breakfast.  It was a nice place and we were tired so we went to bed.  The next morning Maria made us breakfast (stuffed French toast).  Then we set out to take a look at the lake.  It was a nice day. We saw many places you could rent boats like motorboats and wave runners.  Don wanted to rent a speedboat so bad.  I was a little bit nervous…Don: “Honey, I’ve driven boats hundreds of times..” Me: “Not in real life! Grand Theft Auto doesn’t count!”

After walking around more and discussing what we should do, we decided to rent the speedboat.  We rented it for 2 hours…neither one of us has ever driven a boat. We got about a 10 minute lesson then they turned us loose.  It was great!! So much fun.  Don loved driving.  I was a little scared to drive.  The speed limit was 35 mph.  We could barely get it up to 30…it just seemed so fast and when you hit waves the front of the boat would fly up. 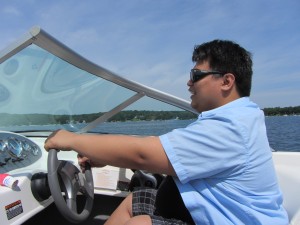 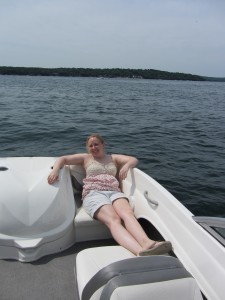 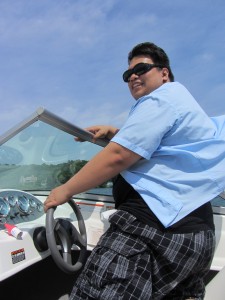 After the boat ride we went to get lunch at a restaurant that overlooked the lake called Popeye’s (not the chicken place).   It was pretty good.  Then we walked around and looked at the shops. At 3 pm we had a 2 hour boat tour of the lake.  It went around the perimeter of the lake and told about all the houses and the properties and a little bit of the history. It was interesting but we were both so tired.

After the boat tour we went back to the b&b and used the Jacuzzi.  Then we went putt putt golfing. We ended the night by going to a small diner downtown.

The next morning we woke up and Maria had prepared a vegetarian omelet for us. Then we set out on the road.  We wanted to go to a cheese festival we had read about but Don wanted to make one stop on the way there and of course it was a surprise. We arrived at a place to pick our own strawberries.  We got a lot of them.  Don fell in a hole when walking and I thought he broke his ankle!  I got rashes on my hands and ankles from the weeds so all in all a successful trip.  The strawberries were amazing.  We even got to taste some wine that they make from all fruit except grapes.  It was a little too sweet for my liking. 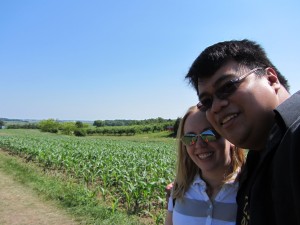 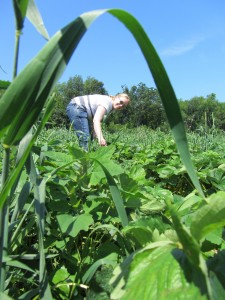 Then we got back on the road to head to the cheese festival. When we got there it was just a grocery store that had a few of the award winning cheeses for people to try. Not really a festival in our eyes.  We saw an old fashioned train at the store and decided to see what that was about. The train went from the elegant farmer store to East Troy Wisconsin.  When we got to East Troy we arrived at the original building for the train depot.  Then we went to an old fashioned ice cream parlor and then back to the grocery store. 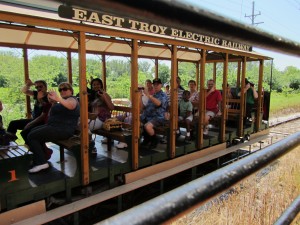 Then we headed on the road again towards home. We made a stop at the Cheese Castle to pick up some Wisconsin cheese.  And we stopped at the fantastic Big Ed’s Barbecue.  So good.  It’s funny because at the beginning of the trip I said to him “Remember that time we went to that restaurant and we were the only white people…well except you’re not white.”  That was Big Ed’s and we ended the trip by going there.