Today we woke up around 3 am so we could make it to our 6 am flight at ohare.  We got to the airport and our flight was on time….so nothing really crazy to tell from Ohare.

We had our connection flight in Dallas/Fort Worth.  We ate breakfast at a taco bar.  It was pretty good.  Then an alarm started going off.  It was a siren with a computerized voice saying “There has been an emergency reported in the building.  Please stand by for further instruction.”  No one knew what was going on and it just kept repeating over and over.  Finally a real voice came on and said the emergency was taken care of so to keep going about business.  Even though he said this the alarm continued to go on until we boarded our flight for Belize.

We sat in the aisle that had 3 seats so we were sitting next to a woman.  She had the window seat.  Eventually one of her friends came and told her they had an open seat by them so she could sit next to them. I was excited because then we would have a giant space…but when I moved over to her seat it was a little damp and kind of smelled like urine, not really sure.  Luckily I only touched the seat with my hand…and I had hand sanitizer.  So for the flight we did not use that window seat.   It was funny though because I saw her when I was exiting the plane and she said “You didn’t sit in that seat did you?” and I said “no” and she was like “good because it made my pants damp”…..

So then we made our way into the airport to go through customs. There was a live band playing some music.  That was a first for me at an airport.

When we made it through customs and met our driver, Abraham.  He took us to his truck.  Abraham drove us 3 hours to Placencia…we had a private ride.  It was cool. He told us things about Belize on the way.  We stopped at a grocery store to get some drinks.  It was so weird.  It was a Chinese owned grocery store in the middle of no where.

The whole ride to the hotel all I could think was this place has really nothing but jungle. 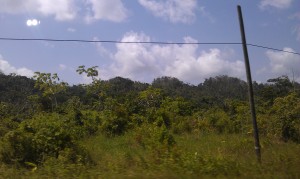 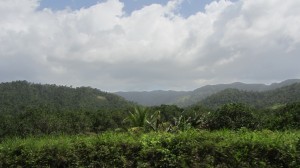 I didn’t really know what to expect but it is just land with trees, very rural.  We even saw Amish! Abraham told us the Amish settled here about 50 years ago.

We finally made it to Maya Beach Hotel and got settled in.  Our room is the Hummingbird Room and we saw a hummingbird outside our window! 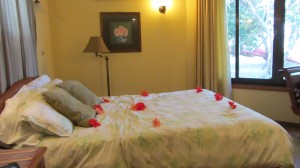 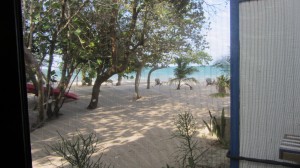 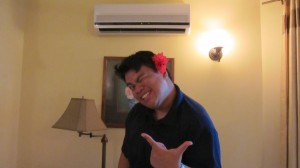 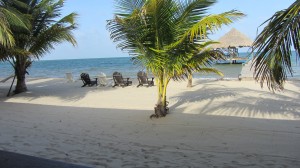 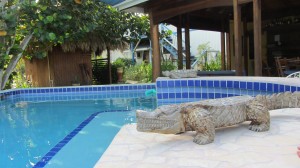 We walked by the beach and relaxed on the deck for awhile.  Then we had dinner at the Bistro here at the hotel.  We had Spicy Fish Empanadas for an appetizer and we both had burgers for dinner. We also enjoyed a Belizian beer. 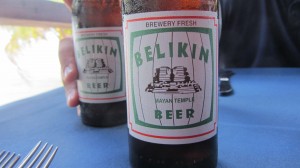 It was really good.

After dinner it was only like 8 but we went back to the room for bed!