We woke up today pretty early around 7 but just laid in bed kind of fell back asleep until 8ish.  Then we decided to go out and snorkel for a bit since the water was calm.

Before getting in the water a woman approached me and asked if we were staying here.  She said she had hitch-hiked from Placencia.  Then she asked if I wanted to look at her crafts.  I told her I had no money on me now so maybe later. When we got in the water we didn’t see much because it’s mostly sand.  Then we saw a few fish and we were getting further out and I heard Don say “Andi come back!”  We’ve been snorkeling quite a bit in our lives and I’ve never heard him say this so I was scared…like was there a shark??  So I just started swimming back to shore fast.  In my head I was a little disappointed on the swim back like…”man if there was a shark out there and he just made us swim like this and draw all this attention to us!!”  I wanna see a shark so bad and if it’s far away and you just stay calm it should be alright…but we when got closer to shore he told me he saw a big jellyfish and I was swimming right for it.  So that ended our snorkeling this morning.

Then we came back in and got cleaned up for breakfast.  Don had a dish called Belizian Fried Jacks.  It had black beans, scrambled eggs and these pastry like things.  I had a Bacon Egg Burger.  It was good.  It was just bacon and 2 eggs over easy on ciabatta bread. During breakfast we could see the woman spreading out all her jewelry and trinkets on the beach to sell.

After breakfast we talked to the hotel owner about our tours.  Now I think we are adding another snorkeling trip.  It sounds pretty awesome. We also made friends with the Maya Beach Hotel cat.. 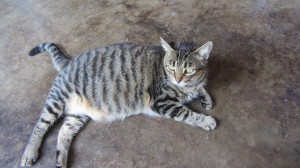 Then we decided to take the bus to Placencia Village.  While waiting for it though….guess who caught us.  The woman selling her crafts.  She was also waiting for the bus.  But she convinced us to look at her items.  I ended up buying a bracelet for $10, because I am a sucker. The bus came around 12:15 and you get on by waving it down.  It was an old school bus painted blue and it said “Richies Bus” on it.  The ride was $1 per person.  It took us to the end of the peninsula.

Once we got off the bus we walked around a bit.  We looked at the beaches and then just walked around.  It was sooo hot!  We decided there wasn’t really much there so we planned to take the bus back at 2:30, which is the last bus of the day on Sunday.  We decided we wanted to try a different restaurant so we tried a place called Wendy’s.  It was good.  The quesadilla I had was great. 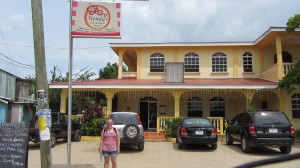 After that we walked the town some more just basically waiting for the bus.  The bus was so crowded on the way back but the driver dropped us right off at our hotel.  Can’t really beat the price of $1 for a bus ride.

Once we got back I wanted to go for another swim….so we went back out to the beach and snorkeled again.  We love snorkeling.  We didn’t really see anything too crazy just a few fish here and there.  The water felt so good, it’s so nice and warm.  After our swim we got cleaned up again and decided to walk about a mile to a different restaurant.

On the walk there the hotel owner saw us and said she would give us a lift.  That was nice of her.  The restaurant was Mangos and it looked really cool.  The food was good.  I had nachos. Don had fried chicken. The problem was when the food came immediately we were surrounded by flies.  It was so annoying.  We just ate so fast.  I feel like all we did today was eat hahaha. 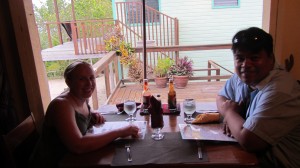 We had to walk back and it was pretty dark.  But it was a nice walk.  When we got to the hotel the whole front of the building had little lizards on it.

Now we are back and we are just getting ready for our excursion tomorrow to the ruins. 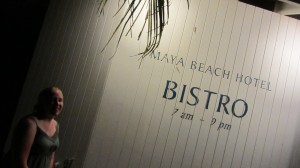