So last night we freaked ourselves out reading in a Belize guidebook about bugs and diseases you could get here! Not a good way to end the night!

We woke up early for our tour of the the Mayan site Xunantunich. We got a bagel from the restaurant here and our guide was here at 7:20. His name was Gilbert. There was a family of 3 in the van already which was surprising because we thought we would be the only ones on the tour. That was okay with me though because I thought an all day tour would be a little awkward just the two of us.

So we started the 3 hour drive to Xunantunich near San Ignacio. We stopped at a gas station about 45 min into the trip. We got some drinks and some breakfast sandwiches here. I wasn’t really hungry after having the bagel though. Then we just kept driving.

About an hour from our destination the driver pulled into a shopping center and dropped the family off. We thought that was weird, we thought they were going with us. So it was just 2 of us to the ruins.

We drove through the city of San Ignacio. It looked really different from anything we’ve seen so far. It has been so rural here in Belize. When we got to the ruins the driver explained to us that we would have to get out of the van and take the ferry across and then walk a mile to the ruins. I thought he meant he was not coming with us….so I was a little freaked out at first! But then I understood and we got out and waited for our turn for the ferry.

The ferry would take each tour bus one by one over the narrow river. It was powered by a man using a crank. It was pretty cool to see. People had little shops set up where they were selling their crafts. We looked around a bit but didn’t buy anything. Then we got on the ferry. 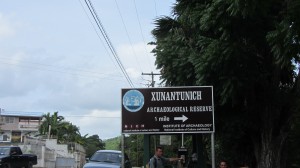 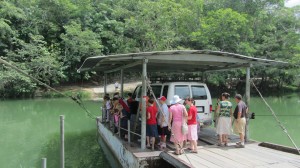 After the ferry we drove to the parking lot and got out. Then we hiked about a mile to Xunantunich. The site was really cool. We hiked to the top and got a view of Guatemala. Going down the ruin was a little difficult for me. I was afraid I was going to fall. Once at the bottom we went all around the site, learning about different things. We saw some leaf carrying ants. It was pretty cool they had a whole little hike they were doing. Our guide Gill showed us if you stomp around the opening of their homes the soldier ants would come out to defend it. I was looking at it and wondering where are the ants?! All the sudden I looked at my shoe and a giant ant was on it attacking my shoelace. They have giant pincers that will just cut things up. So that was cool. Luckily it didn’t get in my shoe. 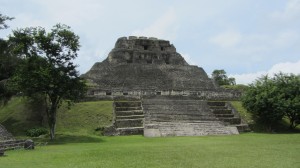 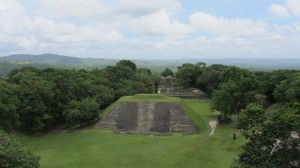 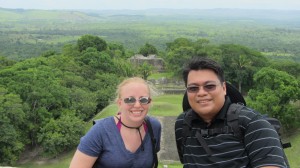 Once we were done with the ruins we went for lunch. I had a traditional rice and beans with stewed chicken and Don had breakfast. It was pretty good. Then we started on the road again. We stopped at a gas station for a break and Gill told us he would be picking up a family on the way back. Once we got to the shopping mart again the same family got in. We couldn’t believe they had been shopping all day! The woman told us they were school shopping.

Then we started on the road again so we could make our last stop at The Blue Hole National Park. This is not to be confused with the Blue Hole that Belize is known for. This blue hole is in the jungle and you hike to it. The hike was only about 5 minutes though. Once you get there it’s a little lagoon that is deep blue. It’s blue because it’s about 100 feet deep in spots. It was kind of cold but once you got in you got used to it. It was cool to see the fish swimming around us. If you went further down you would come to the opening of Herman’s Cave. You could hike through Herman Cave to get to the blue hole, it’s about 2 miles. We didn’t do that though haha. 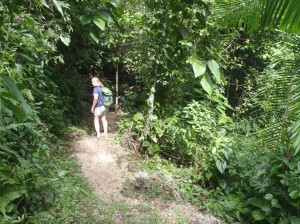 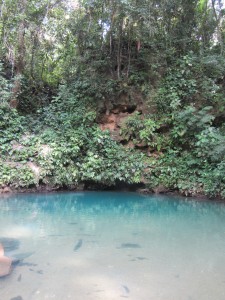 After we got done swimming we went back to the van for the ride home. It rained for about 30 seconds then it was sunny again. It was the first rain we had seen. Gill showed us this spot that is supposedly magnetic because if you put the car in neutral it goes back up the hill. It worked. I wanna know why it worked…is it really magnetic?

Once we got back I was so tired. We ate dinner. I had a personal pizza it was good and Don had fish and chips. Both were good. But we had an amazing dessert. It was peanut brittle ice cream pie. Neither of us like peanut brittle but we tried it. It was amazing! It had caramel and vanilla ice cream with the peanut brittle.

After dinner we saw this cool looking moth on the outside of the hotel. 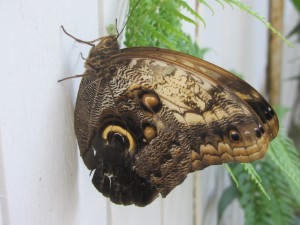 That was pretty much our night because when we got back to the room I was out.