This morning we got picked up at 7 by Avadon Divers.  We didn’t have time for breakfast. We met another young couple that was staying at our hotel, Andrea and Kyle from Michigan.  They went on this snorkeling excursion with us.

Once we got to the dive shop we filled out paperwork and got sized for fins.  We brought our own snorkels and masks.  When we finally got on the boat, it was awesome.  It was a lot bigger than I thought it would be.   It had an upper deck and a bathroom.  They set out some coffee and banana bread for breakfast.  When the boat started moving we stayed mostly on the bottom.  We went up top for a little while, but I really wanted to stay out of the sun.

The first snorkel site was really cool.  It was a small island that had a marine biologist resort there along with a couple of other resorts.  Our guides James and Giovanni did their best to point out the different sea life. We saw a couple Barracudas and many smaller fish.  It was really cool to see the coral because I’ve never really seen anything like that in the wild. 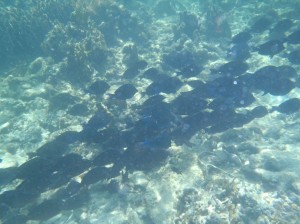 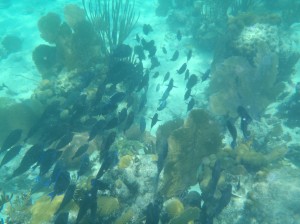 The island looked so cool but after the first snorkel we got back on the boat for lunch.  They had made tuna, chicken and egg salad to choose from.  I had the chicken and the egg.  It was pretty good, although I have to say I was expecting a better lunch from some of the reviews I read.

For the next snorkel location we were in the middle of the sea and jumped off the boat.  The water was deep, probably around 15 feet, but you could still see the bottom perfectly.  There was so much coral and so many different types of fish.  We saw a sting ray!  And a lobster! 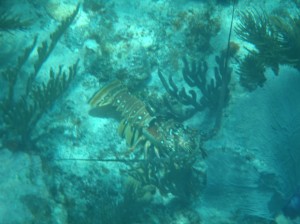 During about half way through the snorkel I could feel the back of my arms getting burnt.  It was such an intense burning feeling, like nothing I’ve ever felt.  Pretty much every time I’ve gotten burnt I haven’t felt it until afterwards.  This was like my skin was frying. It was pretty bad, some of the worst skin pain I’ve ever felt.  It made the snorkeling not so great but I didn’t want it to ruin my trip so I tried to ignore it.

We got back on the boat and James cut up a variety of fruits for us.  My arms felt like they were on fire.  I’ve really never felt anything like it.  If any sunlight touched me I felt like I was burning, like a vampire.  I sat with my towel draped around me.  It was so uncomfortable. Sometimes it felt like I was getting an Indian Burn over and over.

Once I got off the boat the sun was so intense I just wanted to hide from it.  We took a picture with the guides and got in the van to go back to the hotel.  By now I am feeling the burn on the back of my arms and the back up my legs right below my butt.

After getting cleaned up we biked to the grocery store to look for aloe.  There was none.  So we biked to Singing Sands Inn because Don said their gift shop had a lot of stuff.  Luckily they had a bottle of aloe.  We also bought tshirts from our hotel that we could wear the next day because we booked another snorkeling trip.

We ate dinner at the hotel.  I had a spicy chicken sandwich, which I didn’t really like at all.  Luckily Don shared half of his pork sandwich with me.  What a nice husband.  My sunburn just felt weird…and wasn’t very red when I went to bed.  I really lathered on the aloe.