A few weeks ago we celebrated our third wedding anniversary. We have been pretty busy since we moved back to NYC. We went camping with a group of people in PA in September. We camped at Locust Lake State Park. The park was awesome but the experience wasn’t our most favorite. It rained a lot and it was very cold. We also visited the Yuengling Brewery while on this camping trip. My friends Becky and Deni visited with us in September also. It was really good to see them and show them around the city.

So finally in the last weekend of September we went up to the Catskills and stayed at a bed and breakfast. We stayed at the Slide Mountain Inn. The grounds of this place were beautiful. The inn itself was also nice but we have stayed at nicer B&B’s. There were so many things to do just at the inn. There were hikes, paddle boats, and outdoor games. We went on a hike right up the mountain, but we didn’t go all the way up. The views were amazing. I don’t think I have ever seen more beautiful fall colors. 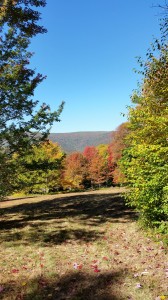 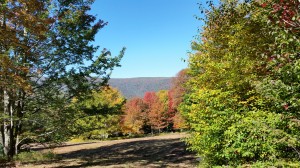 We also walked around the pond on the property. During this walk a snake snuck up on us and was right under my feet. It was pretty crazy. After checking out the property of Slide Mountain Inn we decided to drive around and see what we could find. We found a trail called Giant Ledge Trail. We thought might as well try it out. We were not really prepared at all for this hike, but the weather was beautiful and we felt like walking. We only had one bottle of water to share between the two of us. At first the trail wasn’t so bad, but then it was just like you were going straight up. After about 2 hours of hiking we came to a point where we would basically be walking straight up a cliff. We debated for quite some time if we wanted to do this. Everyone who came down said it was well worth the effort, so we did it. When we made it to the top the views were amazing. It was so beautiful and peaceful. I was so happy we were able to do it. 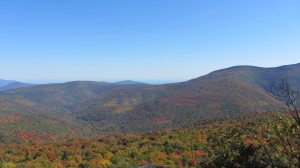 The hike back down was much easier than the way up. I think we even gained energy the way down. It felt good. We went back to the room and got ready to go out to dinner. We knew we wanted to check out the town of Phoenicia so we I found a place to eat there called Tavern 214. It was a more upscale bar and restaurant but not too fancy. We had a sausage slider appetizer. Don ordered a philly cheesesteak and I got the NY Strip. Everything was pretty good and I would recommend this place to anyone in the area. It was a good anniversary dinner. When we got back to the inn we noticed how pretty the stars were…they were so amazing.

On Sunday we got up and did not have breakfast at the inn because we wanted to try Phoenicia Diner on the way home. This place was pretty good. I had breakfast tacos that were probably some of the best breakfast tacos I’ve ever had. On the drive home we also decided to stop by a winery. It was called Palaia Vineyards. I loved everything about this place. The atmosphere was great and they were getting ready to have live music. They have live music often and there were also board games that I saw so maybe it’s a good place to chill. In addition to the wine tasting they had food, beer, and cider. The property was also very pretty. Visiting this place made me long to own something like this of my own. I didn’t want our weekend to end.

Every weekend in NY we have plans. Life has been very busy between fantasy football, school, work, and hanging out. We have been having fun though. We hoping to soon walk across the George Washington Bridge, visit some haunted houses, visit Little India in Jersey, and do some apple picking…