Today we got up to get ready for our Cemetery Tour with French Quarter Phantoms. Our tour was at 11 am, so we set out to find some breakfast. We ate at Cafe Fleur-de-Lis. It was pretty much just a standard breakfast diner, but the menu was very small. We both agreed it was not great but we just needed somewhere for food and coffee.

After breakfast we walked over to The Voodoo Lounge to meet up for our tour. Again we were able to get 2 for 1 Hurricanes but we both did not feel like getting them so the bartender offered me an extra large mimosa and Don got a big vodka red bull.

It was a beautiful day, sunny and warm. We met with our tour guide and walked over to St. Louis Cemetery #1 for the tour. The tour was very interesting and we both really enjoyed it. Lots of crazy looking tombs and a lot of history. 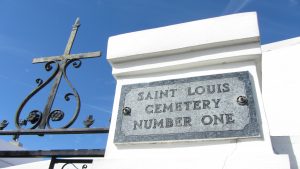 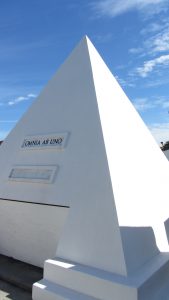 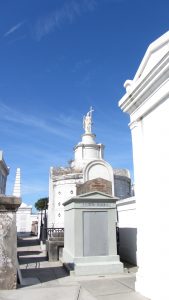 After the tour we walked through Louis Armstrong Park because the guide kept talking about a gumbo festival going on there. It was so crowded though so we didn’t stay long. We were a bit hungry, but we had reservations at Cochon at 4 so we didn’t want to get anything big. We stopped at a hot dog place near the park called Dreamy Weenies for a New Orleans Style Hot Dog. To me they were pretty much just like hot dogs with a million choices in toppings. They were ok for a snack.

After eating we decided to go back to the hotel for a bit because we were so tired. We had a couple of things on our minds that we could do like the WWII Museum or the Insectarium, but we basically just took a nap. Then we got up to go to Cochon. There are too many things to do here so we are gonna have to make a trip back!

Cochon is a highly recommended restaurant in New Orleans so we made sure to make reservations and 4:30 was the only time available. We were able to walk over there and it was good walk. We got to see a different part of NOLA. When we got to Cochon it really wasn’t that crowded. I ordered an old-fashioned and I can’t remember what Don had. The old-fashioned was good, probably the best I had in NOLA. We ordered the fried alligator with chili garlic mayonnaise to start. It was pretty good. For dinner I had the beef brisket and Don had the Louisiana Cochon. We also had the mac and cheese. Overall, we liked Cochon but thought it would be better. Our waiter wasn’t that great and we thought the food would be better. Maybe we went on an off day, but it definitely was not our favorite meal in NOLA. It was worth checking out though.

After Cochon we walked back to the quarter. We went to a few bars, listened to some live music, and then later found a bar with a little balcony that wasn’t crowded so we went to it. It was pretty cool. We felt like at any moment the balcony could break off the building, but it was fun. The waiter talked to us a lot. He told us about Frenchmen Street and we had not been there yet. It was getting late and we had an early flight back tomorrow but we decided to go check it out. It was pretty cool but very crowded. We didn’t stay long…and this concluded our trip to New Orleans. We had a good time!

Today we had to wake up early for our Swamp Tour that we booked with Cajun Encounters.  The bus picked us up and 8 am and this morning was a little rough for me. There was a Subway across the street from our hotel so we picked up breakfast sandwiches from there. The bus was on time but many of the people were not. The bus driver had a microphone that had the volume turned up way too high and he would yell out people’s names. It was kind of ridiculous. When we finally rounded everyone up we headed towards Honey Island Swamp, it was about an hour drive.

The temperature was only in the 50s in the morning so getting on the boat was a little chilly, especially when the boat started going fast. It was also too cold to see alligators (although we did see a dead one) so that was kind of a bummer but seeing the swamp was cool; I hadn’t really seen a landscape like that yet. It was also crazy to see houses built on the swamp. 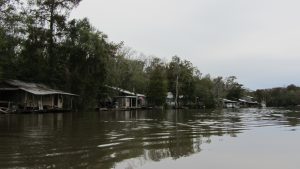 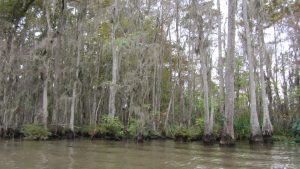 We came across many raccoon families on the swamp and the tour guide fed them marshmallows. 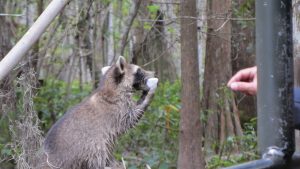 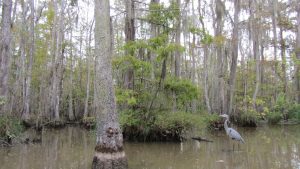 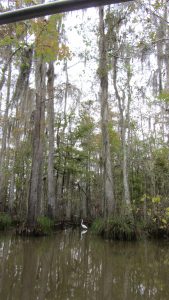 The Honey Island Swamp Tour was pretty cool. I would recommend it in slightly warmer weather. Once we got back we were really hungry so we decided to go to Mr. Ed’s Seafood and Oyster House. When I asked my friend Amanda for fried chicken recommendations this was one of the places she mentioned. The fried chicken was definitely good. After we ate we walked around a bit and attempted to take the trolley back to the quarter but we waited a long time and just decided to walk. The walk wasn’t too bad.

We walked around the quarter and saw a place called Napoleon House that looked interesting so we went in and had a drink. Their Old Fashioneds were pretty good.  After there we went to Cafe Du Monde for coffee and beignets. I really liked this place and I wasn’t really thinking it would be great but I wish we had time to go back. 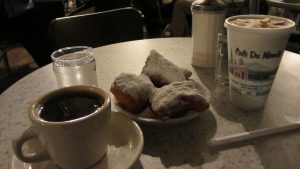 After Cafe Du Monde we wanted to check out Lafitte’s Blacksmith Bar. It is one of the oldest bars in the country. The place looked pretty cool. 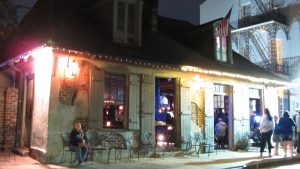 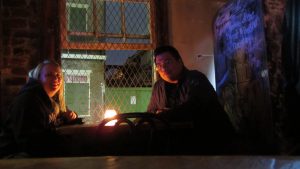 We were pretty tired after a long day so we walked Bourbon Street on the way back to the hotel.

We made it to New Orleans around 1:30 and checked into the Royal St. Charles Hotel. The place seems nice so far and they even gave us free drink tickets for a complimentary Bud Light upon arrival. We got settled in and got our Bud Light and went on our way to check out New Orleans.  From what I saw immediately was that I liked our location of our hotel; it wasn’t on Bourbon but it was definitely walk-able to everything.  One of the first things we saw when walking into the French Quarter, was this little guy chilling at  police station… 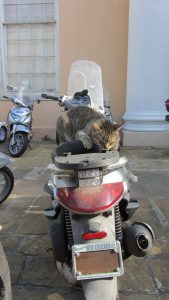 We decided to get a late lunch at Gumbo Shop. The place was very cute; we sat in the little courtyard seating area. I had the chicken gumbo and don had the crawfish pasta. Our meals were really good. I would definitely go back to Gumbo Shop. 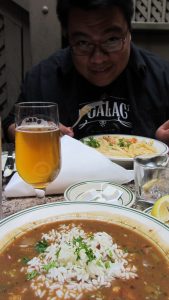 After lunch we had some time to kill before our ghost tour so we decided to do a little walking around. We walked to Jackson Square and saw St Louis Cathedral. 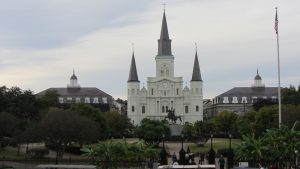 Jackson Square was a cool little park too, there’s a nice view of the Mississippi River there also. We looked around at some of the cool shops in the Quarter and then we decided to get a drink before heading over to the ghost tour. We got a drink at Harry’s Corner because when we looked in it looked so old and it only had like 3 old people. It seemed unique; it was a cute little place. We talked with the bartender and there was this very cute older couple. When the man went to pay he had not realized it was a cash only bar. He and his wife looked so distressed so we decided to get their drinks. The man was so happy and surprised it was awesome. He wanted to bring us a check to our hotel to repay us but we told him to pay it forward and do the same for someone else. I hope he got the chance to!

After our drinks we headed over to the Voodoo Lounge where we were supposed to meet for our Ghost and Vampire Tour. Our Ghost Tour was booked through French Quarter Phantoms. I heard about them through my friend Amanda, her brother is a tour guide there. We were able to have her brother, Sam, as our tour guide and he was great! When you checked in for the tour you were able to get 2 for 1 Hurricanes…so of course we did because it’s NOLA. 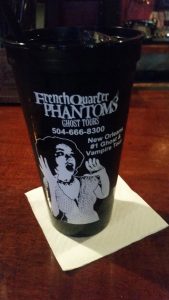 The tour was good and interesting. If you’re in New Orleans you have to do a ghost tour, so why not book with French Quarter Phantoms. There’s so much history and cool stuff to learn!

After the ghost tour we went to Molly’s at the Market to meet up with Jerome. Molly’s was cool we got some chips and guac here. Jerome introduced us to a really cool chocolate alcohol drink. 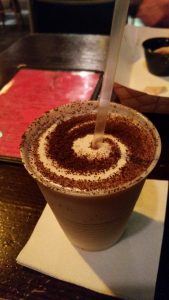 It was really nice to catch up with and see Jerome and he showed us another cool place called Sylvain. This place a really cool bar and the best Sazerac I had in New Orleans. After Sylvain we went to the Carousel Bar. Carousel Bar was cool because the floor of the bar actually moved around like a carousel. We didn’t stay here long because it was getting late, it was crowded, and we had already drank enough. On the way back to the hotel we picked up some chicken from Willie’s Chicken Shack because we were hungry…I don’t really remember if it was good.