We woke up this morning and had breakfast at Cafe Caribe in the Hotel. The food was okay. They had a really nice view of the ocean from the restaurant. It was funny because Don and Judy saw someone they went to Jr. High School with! Crazy!

After breakfast we went to the pool and beach. The pool was freezing cold so we didn’t get in, but the beach was a little warmer. We did a little snorkeling in the beach and we saw quite a few fish. I saw a pretty big fish it was probably about 2 feet long but it swam away really fast. It looked like the barracuda we saw in Belize. We saw this fish that blended in on the bottom in the sand, it looked pretty scary.

It was raining on and off while we were at the beach. We sat out by the pool for awhile but then it started downpouring so we went inside. I did some research on snorkeling excursions. I booked one tour for the island of Culebra. I also researched some beaches on the Southwestern side of Puerto Rico because we are thinking of taking a little road trip there.

Later in the afternoon we went to check out Judy and Steve’s room. We had some rum and cokes. Why is rum so good here?! Then we went out to eat at Casa Lola. It was recommended from one of Steve’s friends. It was absolutely amazing. We had a sampler appetizer and everything on it was delicious! I ordered a steak and it was one of the best steaks I’ve ever had. It’s going to be hard to top this meal. The waiter was so awesome. He gave us so many recommendations on what to order. He also gave us shots on the house, it was a Pitorro. It tasted like a caramel coffee. It was absolutely delicious. He also gave us advice on where to go in Puerto Rico. One of the best experiences I’ve had at a restaurant.

After dinner we stopped by Cold Stone Creamery. It was a good night.

Today we left for a week vacation in Puerto Rico. We were going to meet our friends, Judy and Steve, in San Juan. Our flight left O’Hare at 8:30 am. I was really excited to go somewhere warm because Chicago had been bitterly cold for the past couple of weeks with highs in the teens. The weather wasn’t so great when we were leaving so we were getting worried that our flight would be delayed or canceled. 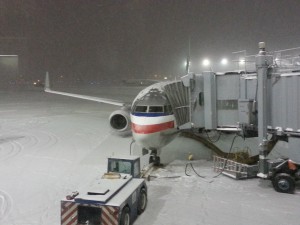 Luckily, our flight was on time. The flight from Chicago to San Juan was pretty good. We bought the flight with our American Airline points. I sat next to a guy that kept falling asleep, but when he fell asleep he moved around a lot and ended up hitting me in my side a few times. He was really annoying. One thing cool about this flight was I believe it was the first time we have had a woman pilot. Oh, I almost forgot though…note to self, never agree to sit in the “bulkhead” seating. We switched our seats before the flight because they were not together and the attendant asked us if we were okay with sitting in bulkhead seating. We just agreed to it. It is the row right behind first class. There is no under the seat bag storage and the arm dividers do not move. The seats felt very cramped but we did a have a little more leg room. But never again, if we can avoid it.

We got to San Juan around 3:30 pm. They are 2 hours ahead of us in Chicago. We took a cab to our hotel, the Condado Plaza Hilton Hotel. The cab fare was about $20 from the airport. Our cabbie was cool, he was very proud of his automatic van doors. The lobby of this hotel was beautiful, it had a big aquarium and the whole place was just nicely decorated. Once we checked in we decided to venture out for some food and to check out the pool. It felt so good to be in warm weather! The grounds around the hotel were beautiful and they had a great pool area and their own beach. 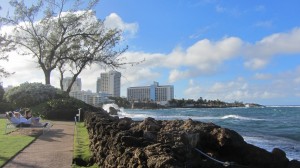 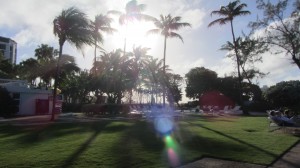 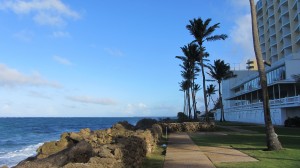 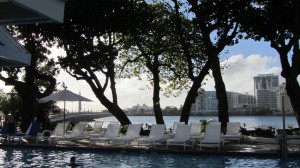 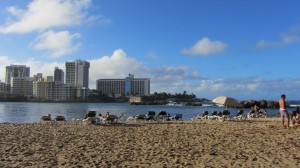 We were going to eat at the hotel but then we decided to walk around outside the hotel. We saw so many restaurants. We decided on a place that had Mexican and Puerto Rican cuisine. It was okay…I had a steak and was expecting a delicious steak like I had last time in San Juan but it was not very good. It was too well done. The rum punch there was excellent though. I wish I could remember the name of this place but I can not find it on google maps right now. Maybe it will come to me later. Here’s some pictures of the view from the restaurant and our food. Don really enjoyed his meal, it was a fried pork chop. 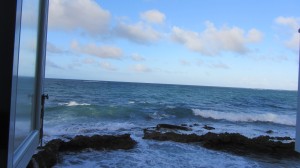 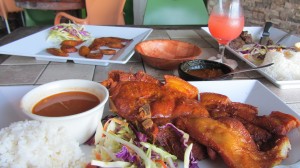 After dinner we walked around more. We were right next to the ocean so the views were amazing. It was funny to see Christmas decorations and be in a such warm weather. We got some ice cream at Ben & Jerry’s because neither of us had actually been to one before. 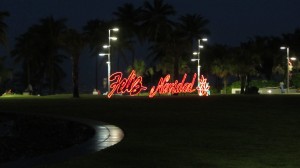 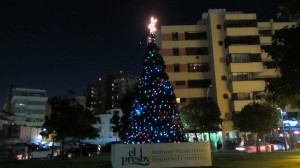 We got back to the hotel around 8:30 pm and we were so tired. We fell asleep and around 1 am Judy and Steve arrived. They had switched their flight to avoid the winter storm Electra. They stayed with us in our room the first night. Slumber Party!