Today I had booked an excursion with Greg’s Safari.  This was the first booked thing we did that wasn’t through Carnival and I am thinking it was the best.  While we were waiting for Greg we were bombarded with guys with about 6 little monkeys.  The monkeys had diapers on and some had clothes.  Before we could discuss anything they were putting the monkeys on us and taking pictures with our camera.  Then they told us $20 a piece!  Don said he would give them $20 for both.  I think that was a rip off but we did get a lot of pictures.

We met Greg around 830 for our tour of Philip’s Rainforest.  Michael and Teresa came with us on this excursion.  I was excited because it looked like it was just going to be us 4 and then another couple but then 4 other people ran over to Greg and booked last minute.  Then when we got to the land rover there were already people in it. I was a little disappointed because I didn’t want a repeat of yesterday, but turns out the vehicle was pretty spacious and we had a good amount of room.

The tour started with a drive to the rainforest that was about 45 minutes.  It was a cool drive, very scenic.  Then we got out and started our hike.  Along the way Greg would tell us about the plant life.  It would rain and then it would be sunny.  It was pretty awesome.  We came to a waterfall and put our feet in the water.  The hike was pretty good, some of it was a little rugged.  While hiking I got bit near my wrist by some kind of ant.  It was painful, but didn’t look too bad. At the end of it Greg gave us some local fruits.  Then it started pouring and we got back in the land rover and made our way back. I will post some pictures of some things we saw on our rainforest hike. 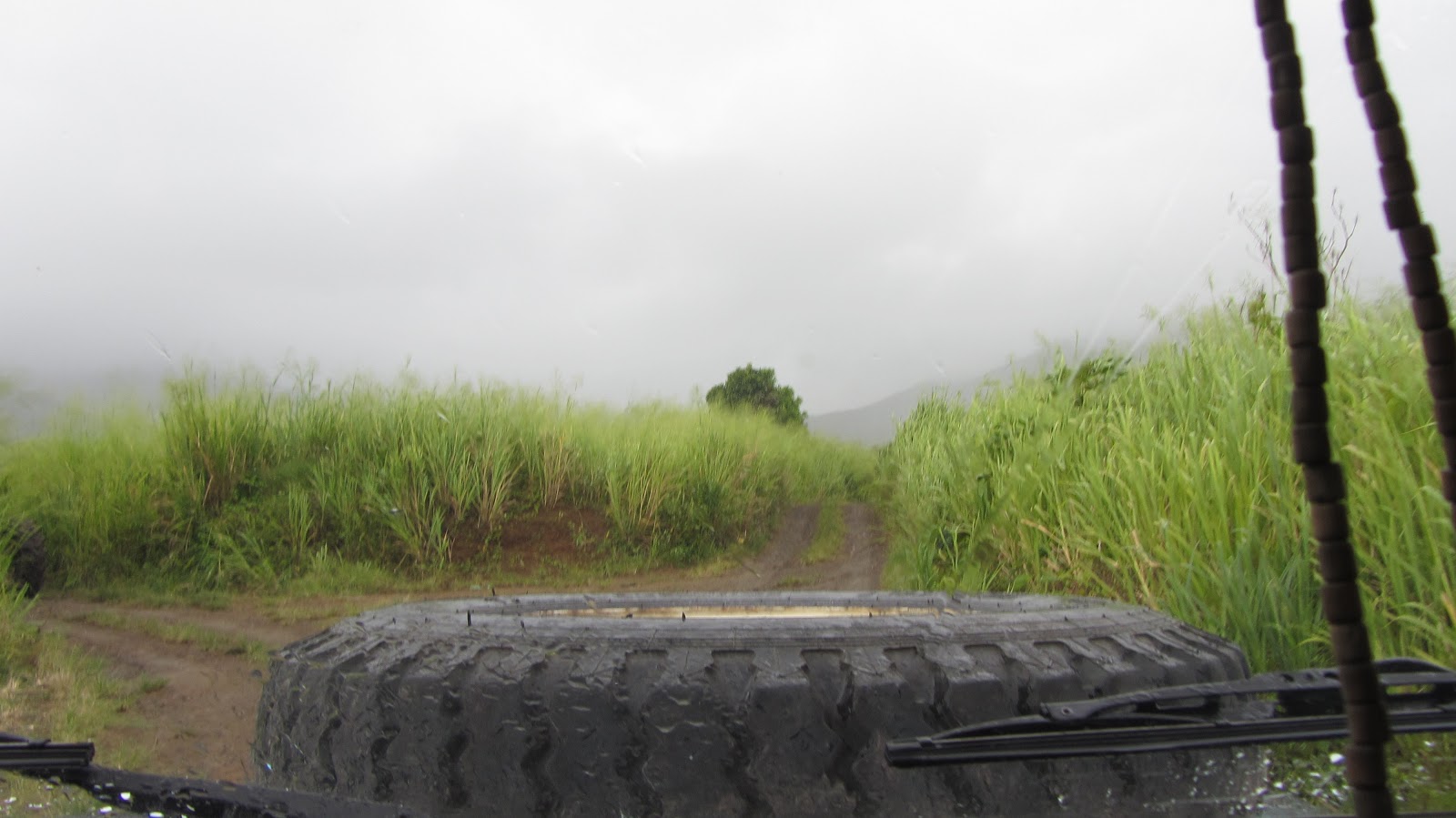 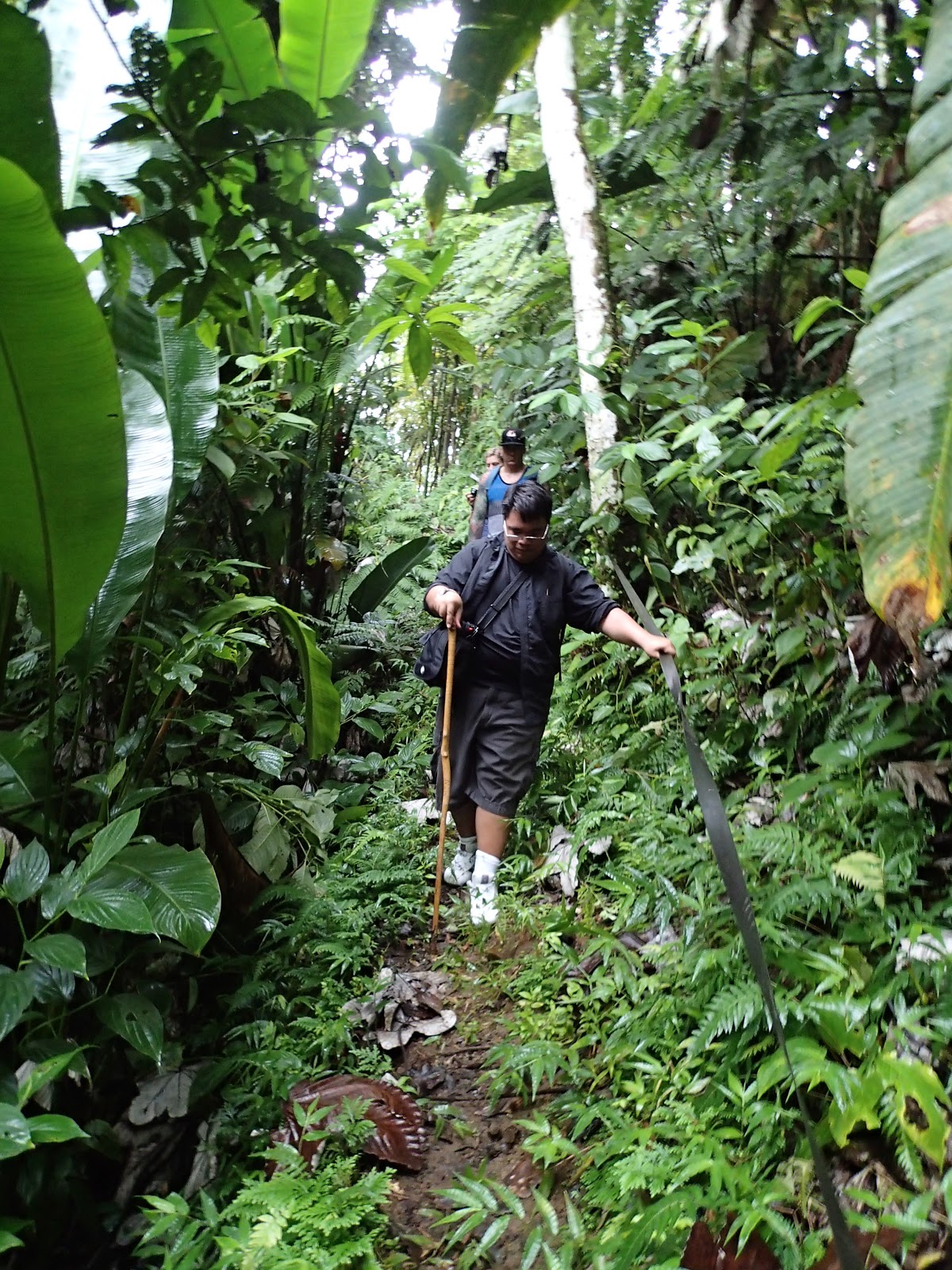 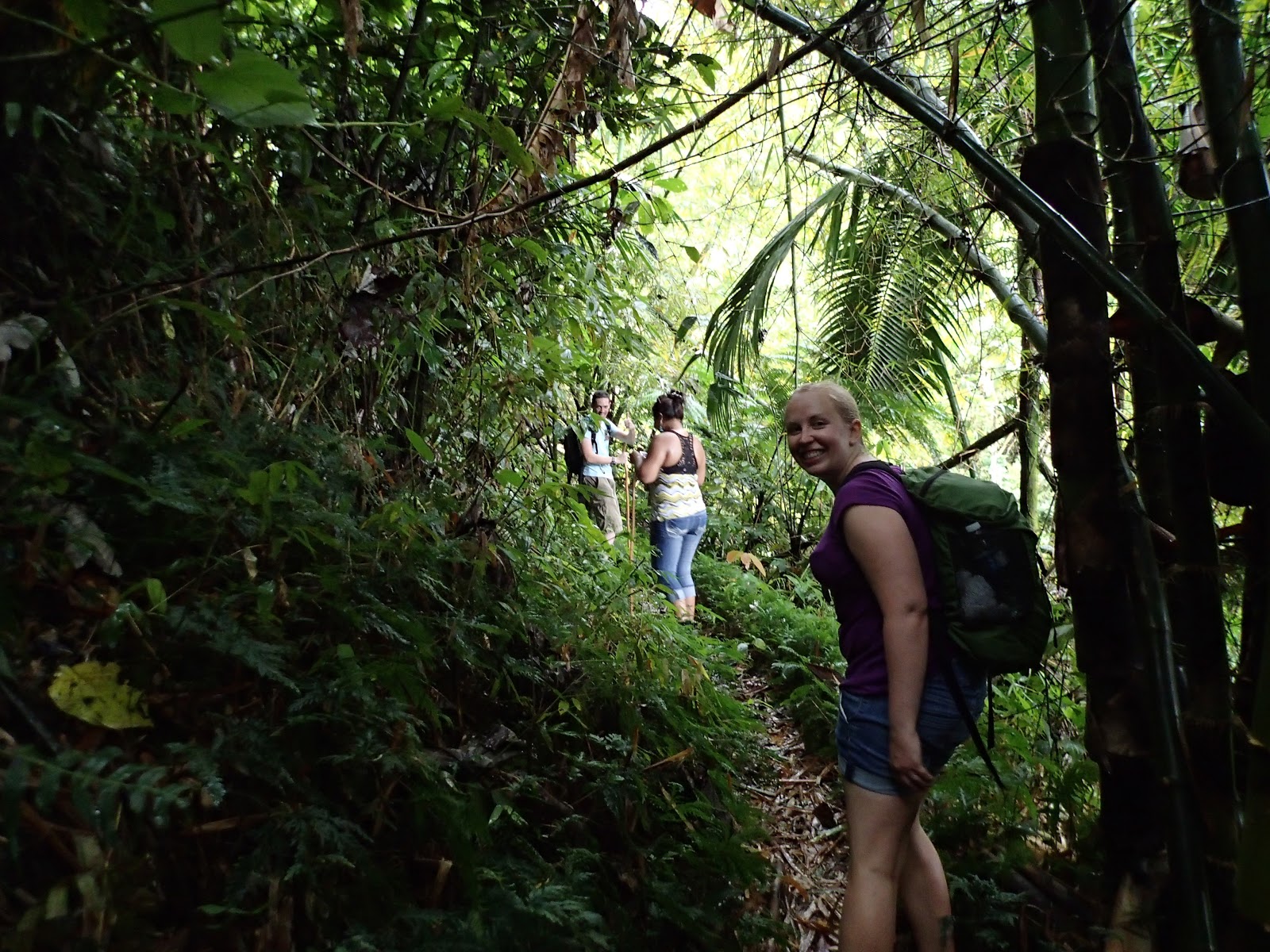 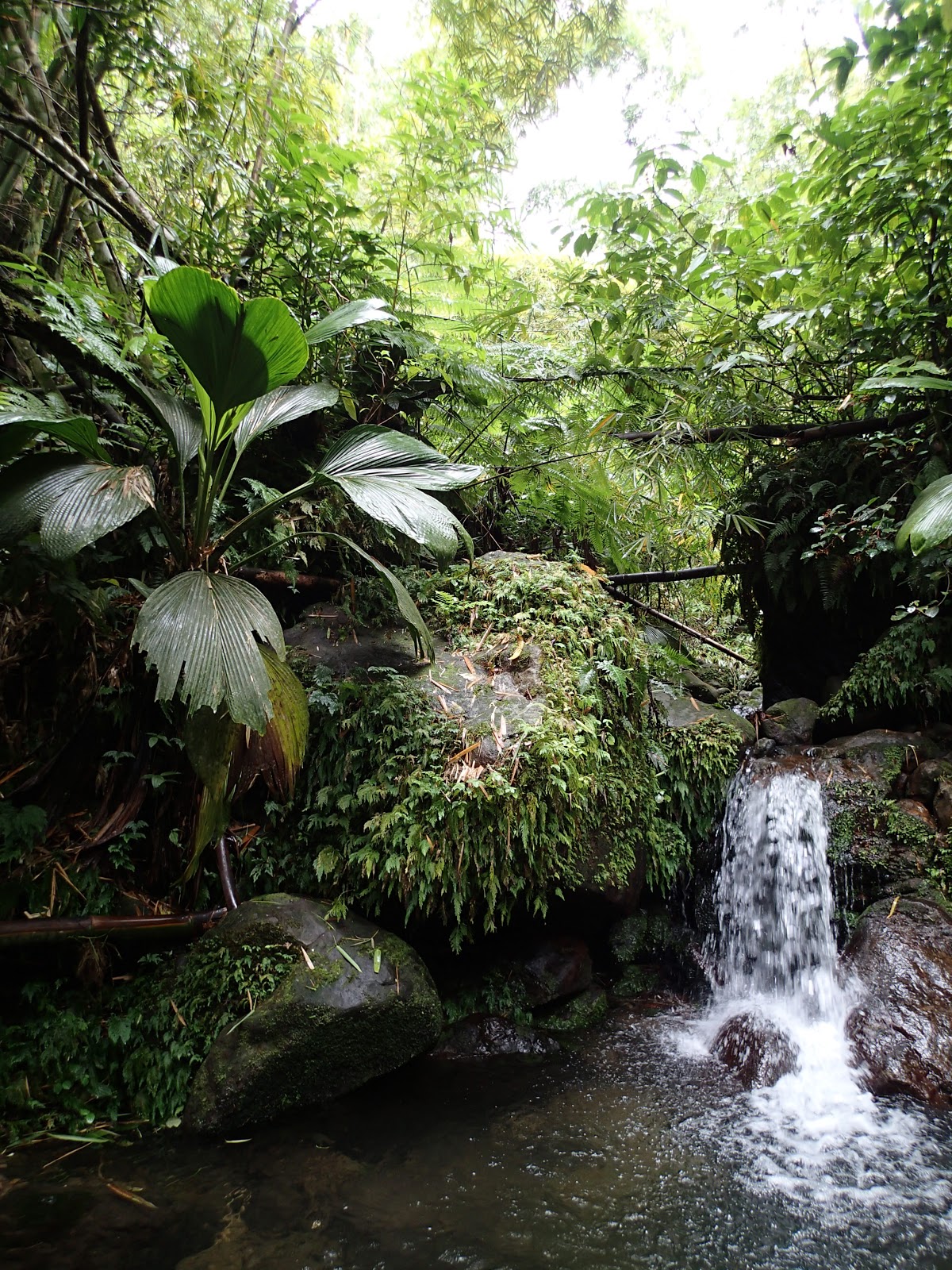 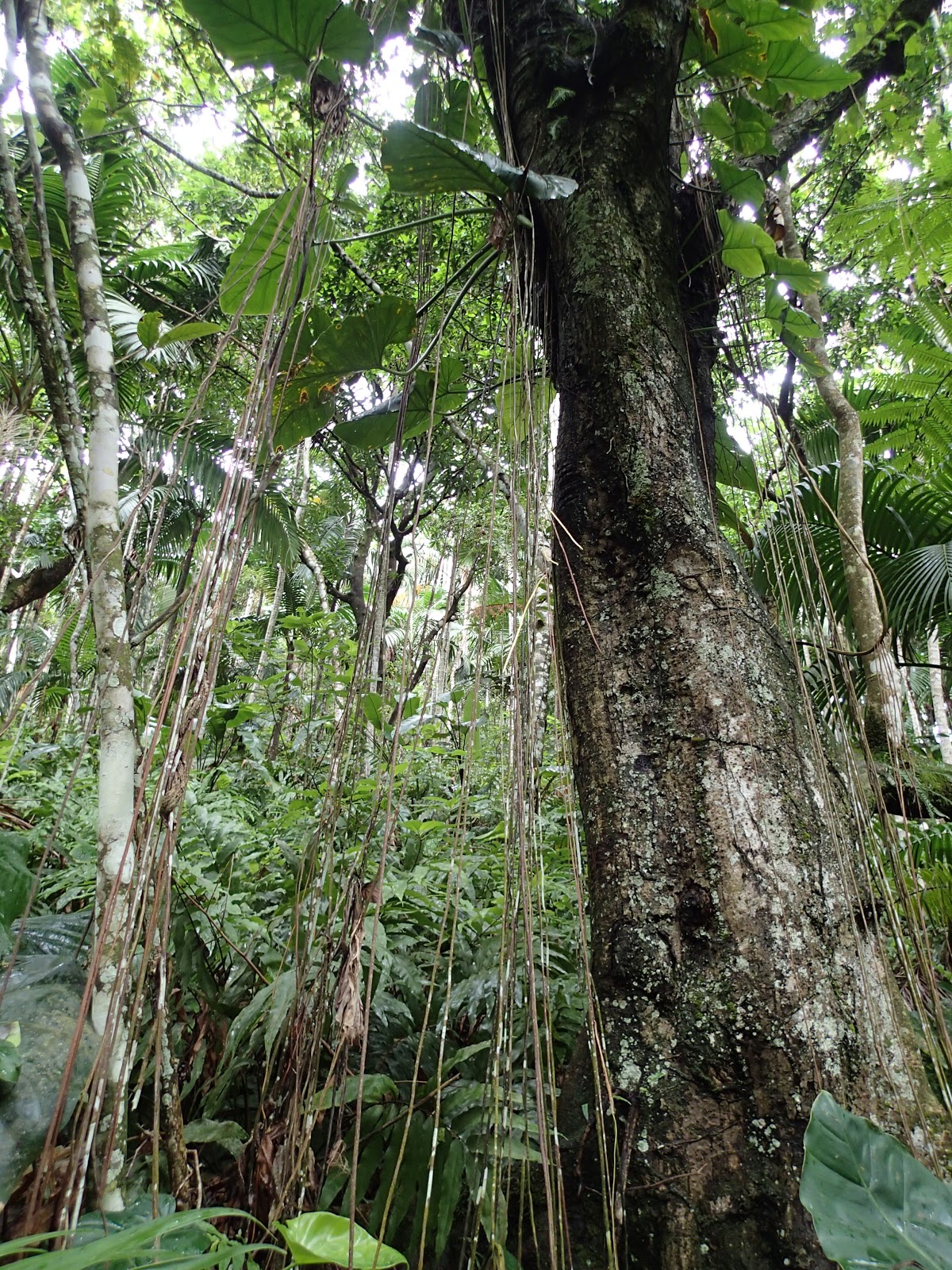 On our way back we asked Greg if he would be able to drop us off at Frigate Bay to go to the beach.  He told us earlier it was a good place for snorkeling. He said that would be fine. He told us about a good restaurant there and to ask for Greg’s Special.  He also told us to tell them we are with his tour and they would let us use their beach chairs for free.  Then he even offered us a ride back to the boat later because he was picking people up from the beach at 430.  That gave us plenty of time to eat and snorkel.

We ate at Sunset Cafe which was part of Timothy Beach Resort.  We got Greg’s Special which was Conch Fritters and Rum Punch.  The fritters were delicious but the rum punch not so much.  I kind of just wanted a cheeseburger and fries but then decided I had to get an authentic meal so I got Stewed Chicken with Macaroni Pie and a Salad.  It was pretty good. 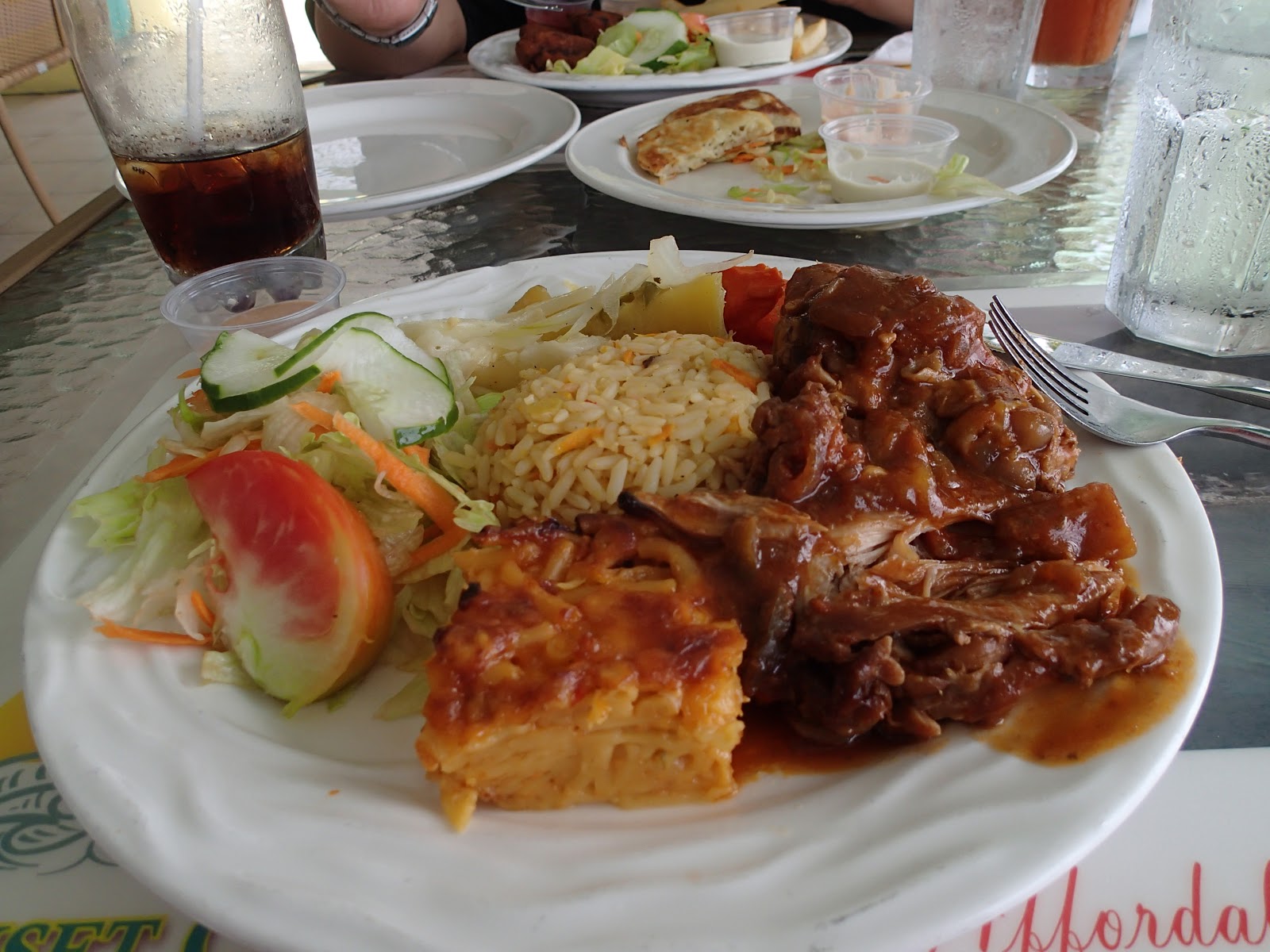 Don got the fish and chips.  Both meals I would say were great. We mixed it up and had a little bit of each other’s meal. 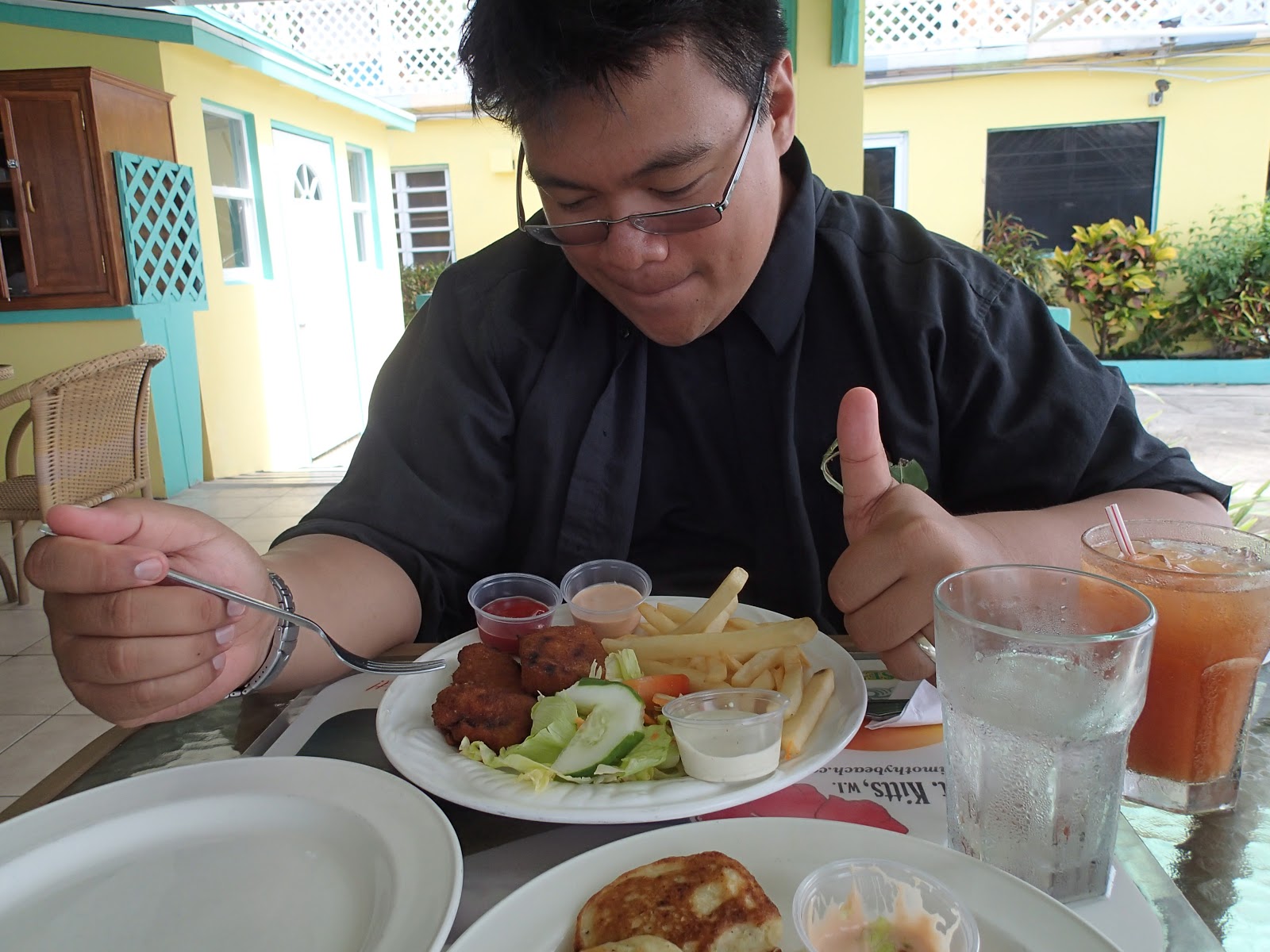 After eating we got in the water.  It was raining off and on but it didn’t bother our snorkeling. I would have to say I thought this was the best location of snorkeling we did on the trip so far.  There was a lot of coral and sea life.  Of course we didn’t swim with turtles but it was a really cool place to explore.  It had a dock that had a lot of coral and rocks with sea life.  Then out further there were rocks and the water got a bit rougher. Don did not want to go out that far but I had to see it.  As I was swimming I saw something pretty big in the rocks so I looked and it was a sea turtle!! I was so excited to see a sea turtle on my own!  I told Don but when we looked back in the water I couldn’t find it. Don had the camera so we also didn’t get a picture.  But it was so cool!  It was a bit creepy in this area of the water for some reason and Don was getting annoyed because he didn’t have his fins so he made his way back to the beach.  I went behind him a little bit after. I wanted to see if I could find the turtle again but I never did.  So then I slowly made my way back up to the beach.  I saw a sea snake!  I was totally freaking out when I saw it but I had to get a picture. Then I swam away keeping my eye on it. 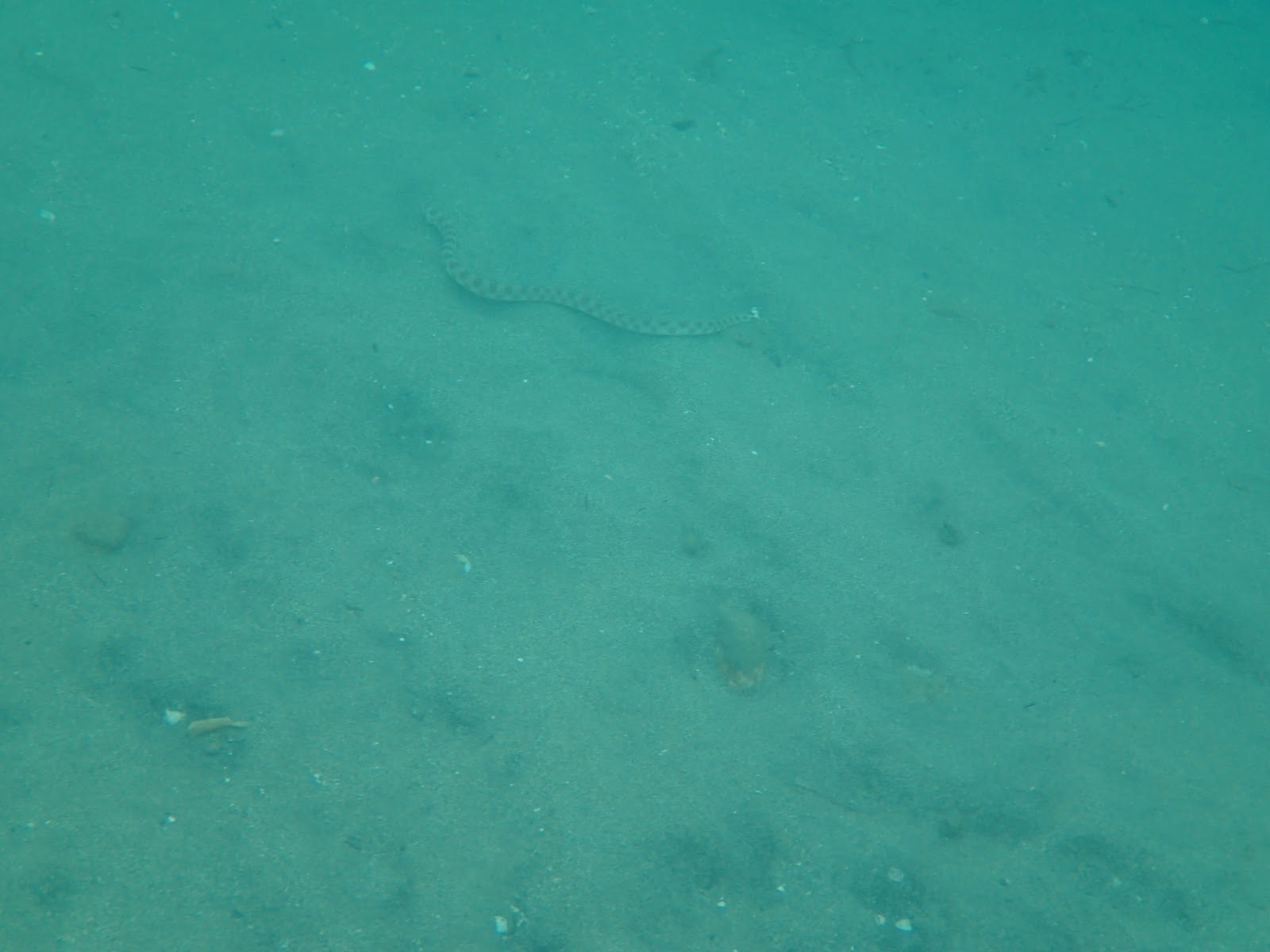 Here are some more pictures of the snorkeling… 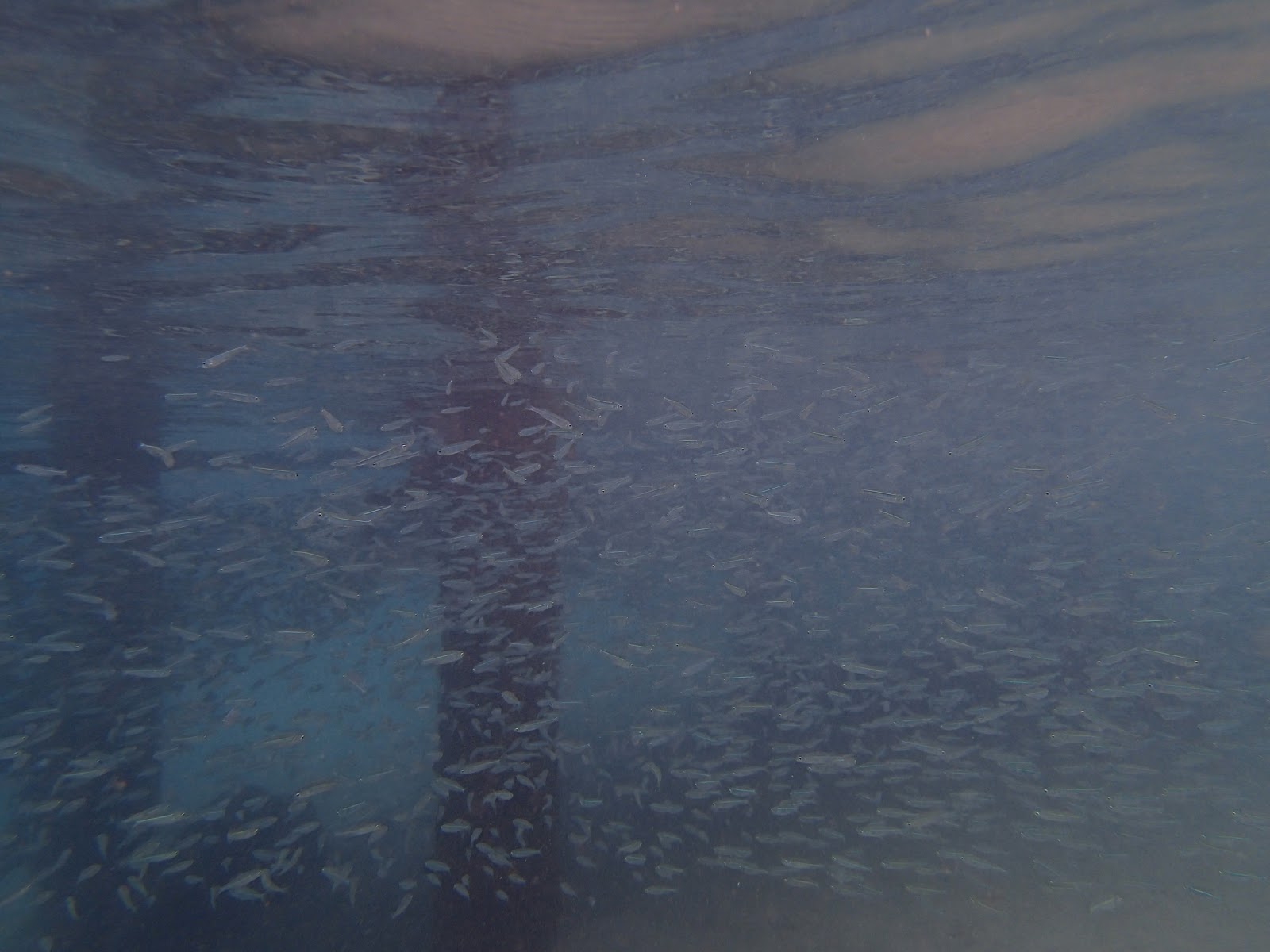 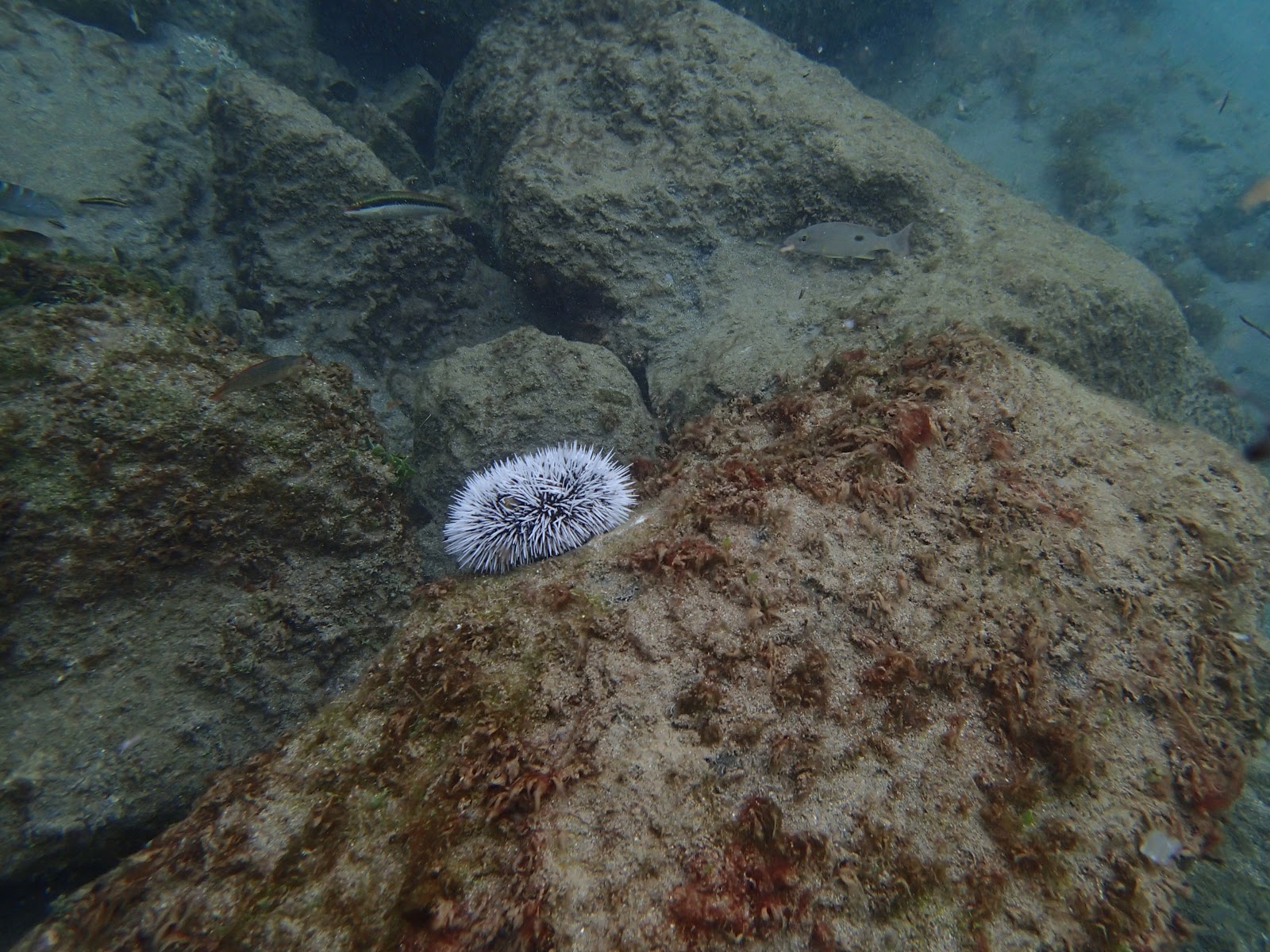 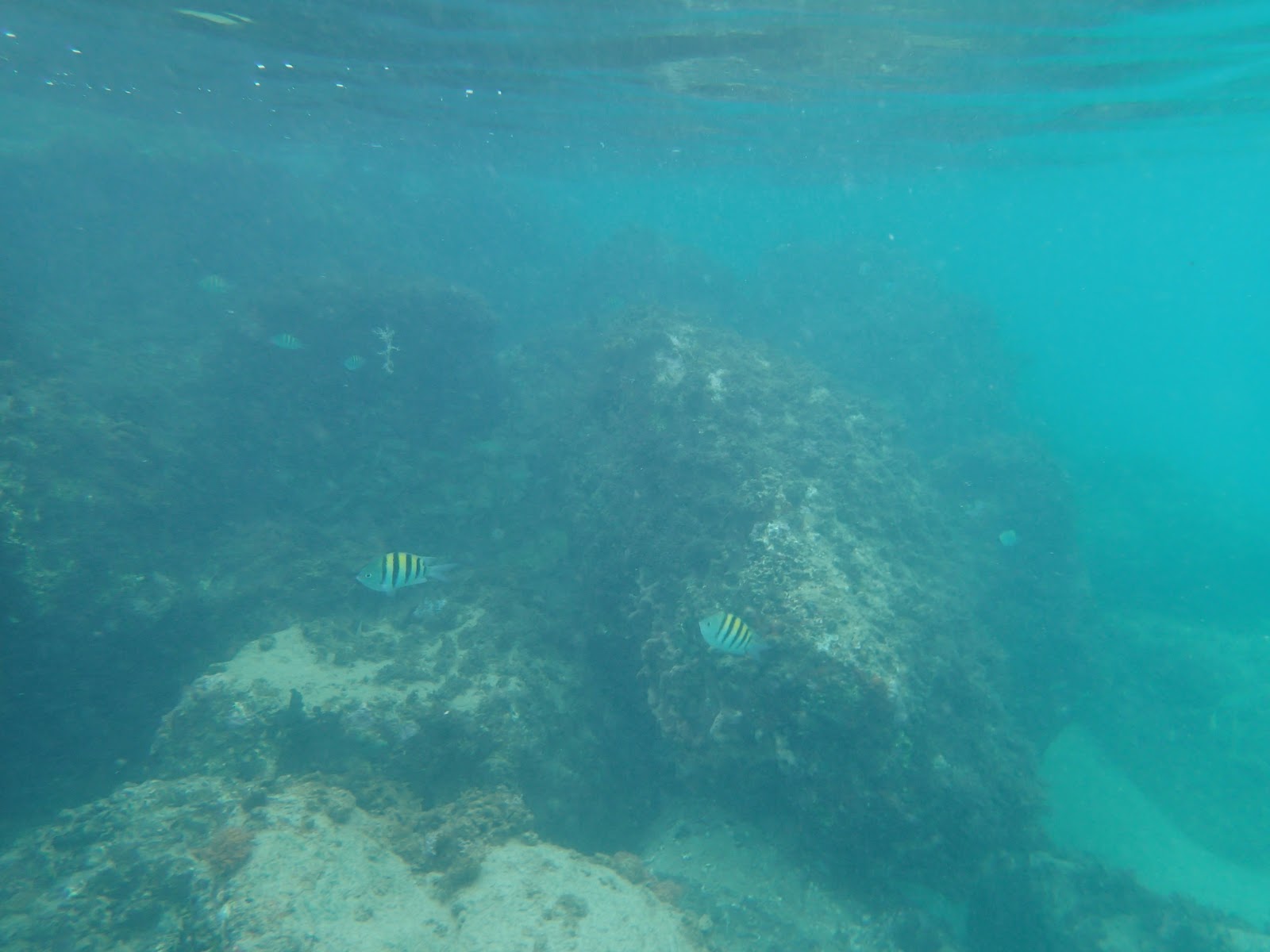 Around 430 Greg picked us up along with some other people and gave us a ride back to the ship.  It was a great day.

Then we had dinner with Michael and Teresa in the dining room.  I had a Thai Chicken Appetizer. It was okay. Then I had Shrimp and Fries for my main course; it was probably one of my favorite meals on the ship so far. Don had Filet Mignon.  During dinner Mike and Teresa told us they got a notice that their excursion in St. Maarten was canceled due to weather. This got me bummed out because I was afraid of what the weather was going to do and how it would effect our day.  After dinner we went to a magic show and then to a comedy show.