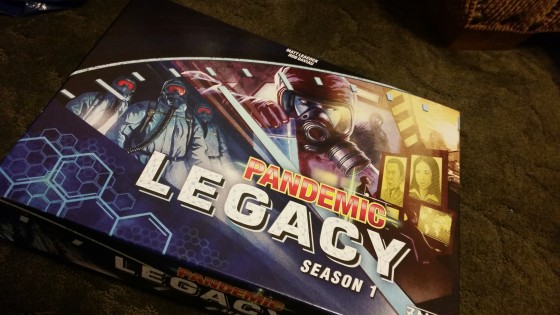 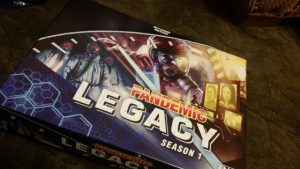 Last year Pandemic Legacy came out. This game is different from any of the other Pandemic games because it is played with cumulative effects. The game is broken down into months and things that happen in one month can affect the next month’s game. What I think makes the game even more fun is the fact that there are cards and boxes of things you can’t even look at until instructed to do so. I have been having a lot of fun playing this game and so I decided I want to write down our experience. So if you haven’t played Pandemic this will probably make no sense and you should probably play it. If you are interested in playing it this will have spoilers. Here’s our experience so far in the January and February campaigns.

Pandemic Legacy January
We played the January episode on 1/3/2016. It was Ian as the Medic, Cassie as the Dispatcher, Don as the Researcher, and me as the Scientist. To us this was dream team and the game went pretty well. We set the game up as told using the 5 epidemics and 4 event cards. Then we pulled the first card with our January briefing that basically told us that we know the drill and that our task was to cure the four diseases. The next card I pulled was the objective card that told us in order to win we must cure the four diseases. The card after that said to stop so I set it aside.

The game went pretty easy and quickly. Things at one point were a little crazy with the yellow disease blowing up but we beat the game with only two epidemics. We also were able to eradicate two diseases, the yellow and blue diseases. I think we all felt a sense of relief because the game went really well. Almost too well. Since we won our funding level went down to two, meaning we would only get two event cards in the next game. We also were able to choose two upgrades. Since we eradicated two diseases we decided to use the upgrades to make curing these diseases easier. I read the upgrade rules from the manual while Don and Cassie went over the options of upgrades. The upgrades were labeled as level 1-4 and we did question why they were numbered but since the rules I was reading from the book didn’t seem to mention anything we just chose our upgrades. We of course chose a level 4 upgrade for yellow, which was that this disease would take one fewer card to cure it. Our other upgrade went to blue and it allowed us to remove all the cubes from a city when treating the blue disease. Needless to say we ended this game feeling very good.

Once we started setting up the February game we knew we screwed up the first game. How could we not have read the cards correctly?! I blamed myself for not reading after the stop sign but now we know…fortunately we had played just a week earlier so we could recount the game pretty accurately. The mistake I made was we were supposed to pull the next legacy card after the second epidemic card was pulled in the January game. Since I saw STOP on the card I just assumed it meant to pull it on the next game. Luckily we had beat the game very early and just after the second epidemic so we didn’t feel so bad. The card informed us that the disease with the most color on the board would be labeled C0dA-403b and that it could not be cured and treating it would require one additional action. After discussion we realized this would have been the yellow disease because it was out of control on the last game but we also managed to eradicate it once the cure was found. This posed a problem what do we do? Do we just make a random disease the c0dA or do we make it yellow? The other problem was we had an upgrade on yellow that made it easier to cure. So that would not make any sense to make it c0dA. After discussing we decided that since we should have discussed this in the last game we would not have eradicated yellow because it would have been impossible so we tried to remember which disease was also close to eradication. It was black. So we switched the stickers and put the upgrade on black and put the c0dA on yellow. Cheating I don’t know? We are new at this legacy game.

The next card said to draw at the end of our January game before selecting our upgrades. It gave us a win bonus for our February game which was remove one disease cube from the board after the setup of the game. So that was nice. Next card was to be drawn before setting up the game in February. This card talked more about C0dA and how it mutated into not being able to be treated at all now. So a new sticker was placed in that disease spot to remind us of this. We got a new character, the quarantine specialist. We also got quarantine markers in one of the boxes we had to open. We also got new character relationships. This is where we learned about character relationships. Since Ian was going to play a new character, the quarantine specialist, we could make him have a special connection with another player already in the game. We chose to make him co-workers with the scientist so they could share knowledge as long as one of them were in the city card to be passed. This seemed to be the thing to do because the scientist always needs cards to cure diseases.

Our February objective was to discover cures to the 3 normal diseases. Since yellow was impossible to cure the new quarantine option made it easier to deal with. Basically a quarantine marker blocked a city from being infected for one time. Anyone can place a quarantine marker, but the quarantine specialist can place a marker anywhere on the board for a free action once per turn.

We were able to beat February pretty easily also. There was a mixup at one point in the game about which disease had which sticker upgrade but right now I can’t even recall exactly what happened. Since we won, our funding went down to zero which worried us a bit because this meant in the next game we would not have any event cards. We also got to pick two new upgrades. We upgraded the quarantine specialist to also be a pilot so she would not have to discard a card when taking a direct flight. We also used the research station upgrade which allowed us to put a permanent research station in a city that we built during the game. We chose to keep one in Hong Kong. We also got a win bonus for our game in March to add a quarantine marker to any city after game set up.