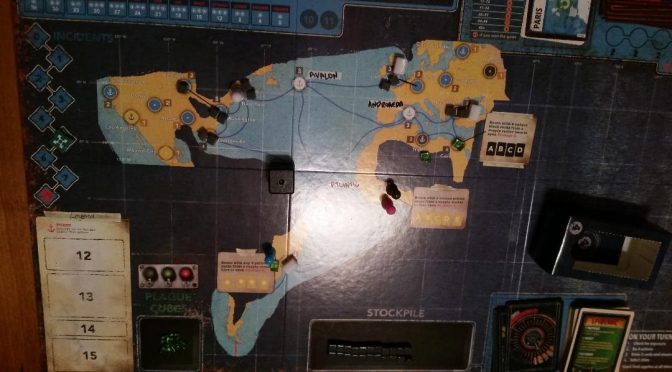 Before playing we chose our game end upgrades from the January game. We decided to upgrade the Farmer character named Goods. We gave her the courier ability, which allows her to deliver supplies to an adjacent location. With our last remaining unit I believe we increased the population in a city, but right now I am having trouble remembering.

So now we were ready to see what February would bring us. I played my usual character, Claire the Laborer. Cassie played Aofie the Administrator. Ian played Newt the Radio Operator and Don played the newly transformed Goods the Farmer. To start our game out we had to draw some cards from the Legacy Deck. We were told to destroy our objective of re-conning North America (which we accomplished in January). Then we read another journal entry about the Hollow Men expanding their raids into South America. The entry hinted at the the Hollow Men possibly trying to look for one of the labs working on a cure. So now we have a hint that we should try to recon South America. There’s also a hint of having to dilute supplies or abandon supply routes due to the Hollow Men. In February we started with 33 supply cubes in the beginning of the game as opposed to the 36 in January. From here on out supplies look like they are less and less in each month. We also got another Turning Point to add to the Game End area. This one tells us to scratch off the box if we have lost 4 games in a row….hopefully that never happens! We still have our Turning Point #1 that we tells us to open things if we have any cities with 0 population.

Starting February we had 3 objectives, that of which we had to complete 2. One of them that had to be completed was creating 3 new supply centers. Then we could either connect 2 new cites on the grid or recon 1 unknown region. Going into the game we planned on  re-conning South America because it seemed the easiest with being able to have any 4 yellow city cards while the other recons had to have different cities. We also thought connecting 2 new cities to the grid seemed doable so we would see how the cards fell.

The game didn’t go as planned but things still worked out. We built a supply center in Istanbul so we could increase its population at the end of the game. In the middle of the game we saw that re-conning Europe would happen because Newt had all of the cards needed. So we abandoned the idea of re-conning South America. We were able to recon Europe fairly early on, because Goods had the ability to make a supply center in London.

Once we discovered Europe we found out there were still some functioning aircraft on old military bases. This gave us the ability to fly between havens and supply centers! We also discovered a new city–Paris, and we got another unrationed event. This unrationed event allowed us to destroy up to 3 copies of one city card in the infection discard pile. So now we had 2 unrationed events in our deck which was good because if we won this game we would have 0 rationed events for our first game in March.

We were able to leave February pretty much unscathed. With our supply centers we could increase the populations in Sao Paulo, Istanbul, and London. We also had the help of 2 rationed events in this game-One Quiet Night and Drastic Measures. Drastic Measures helped us remove plague cubes so we wouldn’t have to worry about the population at the end of the game. As our game end upgrades we added a permanent supply center in Sao Paulo and we increased the population in Paris and Chicago because they were low and we figured we would be discovering Chicago soon. Can’t wait for next month!