Today was our last day and we are definitely not ready for this vacation to end! Hawaii has been awesome. We tried to sleep in today but that lasted until about 7:30. Don found a breakfast place called Kihei Cafe. This place is kind of different because you wait in line and order then you can find your seat. The line may seem long but it goes fast and it seemed everyone was able to find a seat when it was their time. So even if it seems like you’ll never get a table, just try it, their timing of everything seemed to make it work! It was also good. I had the huevos rancheros and Don had the pork loco moco. I would recommend the loco moco over the huevos rancheros, but everything was good.

We started the day by heading to Po’olenalena Beach.  I chose this beach because of the name and it had really good reviews. It was a beautiful, quiet, uncrowded beach with  very fine soft sand. We went to the North side first. The visibility was low due to the sand being brought up by the surf, but almost immediately by the rocks we saw a sea turtle. Then 2 more turtles and another—there were at least 4 turtles just hanging out and eating here. It was so cool! We saw some really small turtles here and honestly after awhile I lost count I think we decided there were 6 turtles here. It was hard to stay in one place due to the waves but we were able to hang out and watch them for awhile. 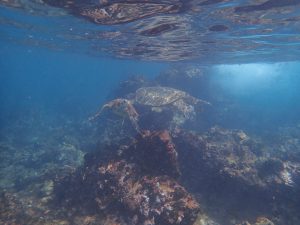 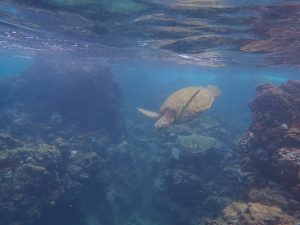 We swam South to the middle of the beach where there was supposed to be a middle rock but we couldn’t find it so we went furthest South to a the rocky edge of the beach. Around the corner of the beach in the rocks we saw 3 more turtles. They would get so close! The coral here looked really cool also; it was a lime green. The water here was pretty rough and we had to be careful around the rocks so we swam around the rocks to the next beach and rested there in the water a bit. While we were here we talked about how awesome the snorkeling had been here in Hawaii and how we had seen so many turtles. Every day we have seen turtles, even on the day we didn’t get in water! I did make a comment though that I was a bit disappointed not to have seen one shark. We decided to swim back to the beach where our stuff was. 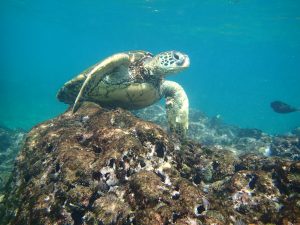 On our way back I heard Don start yelling for me and I felt a little scared because I didn’t know what was happening. He said he saw something cool but I couldn’t see it. Could it be a shark?? Then he told me it was a giant ray. I was so disappointed that I missed it. We sat, treading water for about a minute looking around and the ray came back!

It would circle us, leave, and then come back. It was huge! It also seemed super curious about us. It kept coming back. We swam with this manta ray for a few minutes. Don said it was starting to freak him out because neither of us knew if it was dangerous or not. I didn’t think it was but it was time to get back anyway so we left the ray. 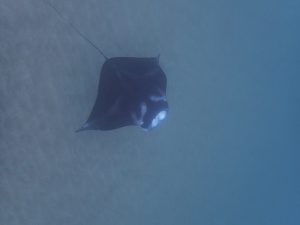 On our way back to shore there was another small turtle, so if you’re looking for turtles in Hawaii this beach seems to be the place to be!

Once we got back to the hotel we hung out at the pool for a little bit then we got cleaned up and had a beer. We then went out to look for some postcards. During our shopping we found a little wooden turtle and manta ray to add to our whale shark we got in Mexico. It seems like a cool tradition to get wooden carvings of all the really cool things we have swam with.

For lunch we had to try Outriggers Pizza. Outriggers Pizza is a food truck with a wood fired oven, so that was pretty unique. The pizza was good so check this place out! After eating I wanted to go to a bar that had the Cubs game on but we couldn’t really find one. I also for some reason was kind of grouchy. I didn’t feel great for some reason and I was a little tired. We did go to a tiki bar, called South Shore Tiki Lounge, and had some calamari with wings. I tried their mai tai and it was different than any mai tai I’ve ever had. I don’t know if I would recommend it. We talked to a couple here that had moved to Maui from New Jersey. They were interesting.

We went back to the hotel pretty early because we were tired. We hung out, watched Big Brother, and tried to finish our beers and snacks since we leave tomorrow.