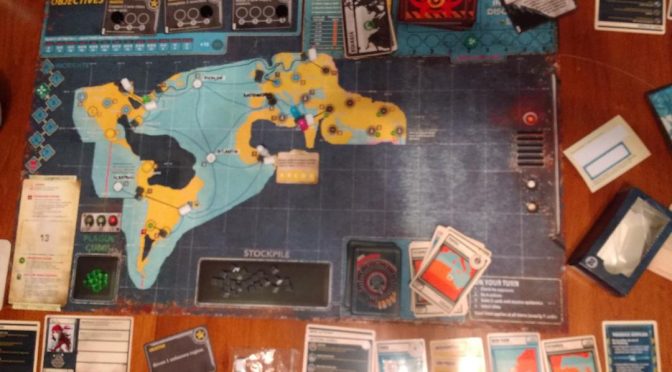 It had been awhile since our last Legacy game so we were excited to start May. We used the same team (Aofie-Administrator, Claire-Laborer, Newt-Radio Operator, & Goods-Farmer) From the journal entry before the game we found out that the Hollow Men were moving from the Americas into Europe and Africa. It also said we learned where our leaders went and why we’re still here, which none of us really got.  From the archives we learned about a place called Utopia. Other than that we really didn’t know much going into May other than we had to finish 3 objectives out of our 4. The objectives haven’t changed they were: connect 2 new cities to the grid, complete 2 searches, recon an unknown region, and the mandatory objective of building 3 new supply centers.

To start the game we had no rationed events to help us out because we won the last game. We still had the unrationed event of Strategic Reserves which would move 8 supply cubes from the reserve to the stockpile. With the help of the of the companion we found in Paris it was fairly easy for Claire to build supply centers. One supply center we made was in Lagos because we planned to use a game end upgrade to keep it there to make reconning Africa easier. We were able to search two cities: Moscow and Lima. Aofie searched Moscow and found a card that would allow her to give another player a player card. She gave Goods a card to allow her to make a supply center.  Goods searched Lima and found a companion that would allow a plague cube to be removed from her location. It could be played at any time. We were able to end the game by reconning the Middle East region. This was not the happiest recon because we found out the Hollow Men were here. We also learned the Hollow Men transport rats to release them into cites to make them infested. There were already infested cities on this new part of the map! We also heard about satellite towers here that picked up transmissions but who were they from? There was a hint that hopefully in August we could be able to fine tune our equipment to pick up their transmissions. We also learned we had no way of reconning further east yet.

In this recon we connected Baghdad to the grid. We got 4 Hollow Men Gather cards that went into the infection discard pile. We also got the Renewel  unrationed event. This card will allow us to place a character ability worth 2 or less on a character card currently in play. The cool thing about it is we can place it over a scar.

Luckily, this ended our game in May with a win and we didn’t have to deal with the new Hollow Men aspect of the game.  For our game end upgrades we had 5 points and we wanted to use 3 of these to keep our supply center in Lagos. This created some drama because we realized we had no more permanent supply center stickers. So we decided to upgrade Newt the Radio Operator to a Helmsman which would allow him to do a free Drive/Ferry action each turn, essentially giving him an extra action. Then we were trying to decide what to do with the other 2 points when I realized that we hadn’t read from the legacy deck at the end of the game like we were supposed to. Guess what was in the Legacy deck? More permanent supply centers. So now we had a dilemma do we not go with the supply center in Lagos and keep Newt’s upgrade or do we keep his upgrade and go with 2 others? We had already stuck the sticker on the character card. We eventually decided we needed the permanent supply center in Lagos so we used that and with the other 2 points after much consideration we gave Goods the Smuggler character upgrade. The smuggler can discard a city card to take a supply cube from the reserve and put it in the matching  city card. We decided that we would keep the Helmsman sticker on Newt’s character card but it could not be used until after the next game when we could hopefully purchase it.

Overall we felt pretty good how the May game went, but we were in for some trouble coming in June.