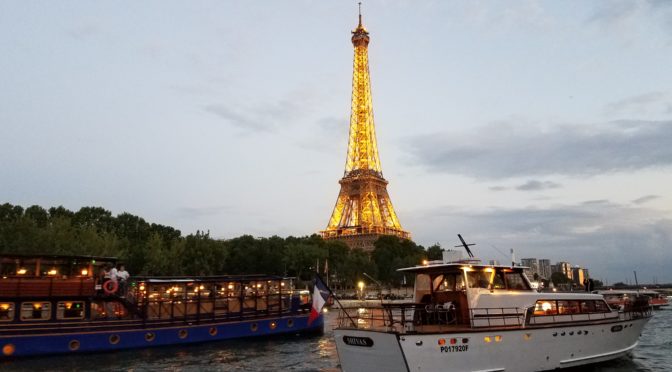 Today we woke up early to pack and get ready to leave. Damien had hooked us up with a shuttle to pick us around noon. The shuttle was going to take us to our connecting train in Lisieux, this avoided us having to get the train in Deauville and would be faster. Even better though when the driver got to us he asked if we wanted him to just take us straight to Paris for the same price! He had to go to Paris anyway so it wouldn’t be out of the way. This was so awesome!

We made it to Paris around 3 pm and got on the train to head out to the airport. It was pouring rain. There was a weird incident on the train where it seemed we were almost mugged. A guy apparently tried to put his hand on Don’s bag and Laura said something to him. He had guys around him that were obviously with him but unfortunately he got caught. After they had some words they left us alone.

We got to the Hilton near the airport and checked in. I was super hungry and had a headache. It was still early and our last night in Paris so we decided to take the train back to the city. This did not seem super fun considering all of the travel we had been doing and I was tired but when in Rome….? Just Don and I went and we found a restaurant called Flams. Basically Flams makes a pizza that has no sauce; it’s like a flatbread with cheese and other toppings. You can pick a package and just keep ordering different pizzas. They are like crackers so two people could easily finish 3 or 4.

We walked across the river to get a view of the Eiffel tower. It was a long walk but fun. We watched some kids skateboarding and we saw a group of people doing some weird juggling.

After finding a good spot to view the Eiffel Tower we got some waters and sat down. When the sun sets the tower does a light show and it was very cool.

On the way back we walked through a museum of modern art and saw people dancing. We took an Uber back to the train station so we could go back out to the airport Hilton. We got back around midnight. Tomorrow we leave Paris around 11 am. It has been a good trip.

Not much happened on our departure day. The breakfast buffet at the Hilton was pretty good. It was so hot in the Paris airport and not a lot of restaurants where we were. One thing to note, you need your passport to make purchases like food! I left my passport with Don and waited in line at a convenient store and couldn’t buy food!! So weird!! 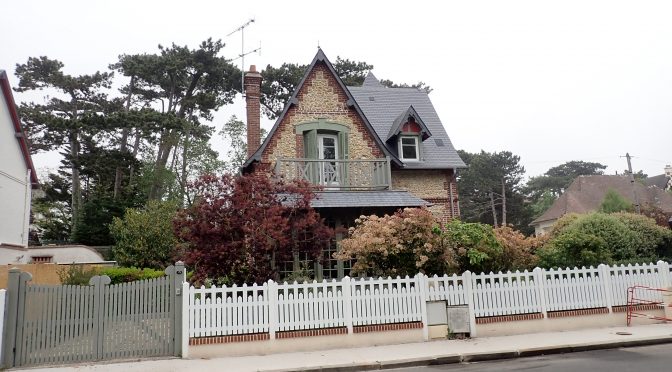 Today we woke up around 7:30 and got out of the room by 8:45. We wanted to eat at the hotel but it was crowded! There was a wait for breakfast! So we decided to go down the street and try a breakfast place since we were a little short on time. The restaurant was called Le Pre aux Clercs. It was ok, just an average omelet breakfast. If you’re in a hurry though going to any cafe in France is not the place to be.

Once we were done with breakfast we took an uber to the train station to meet Greg. We all took the train to the airport to pick up a rental car to drive to the house in Deauville. We got a manual van haha—so thankfully Greg had driven a manual in college. The drive to the house was about 2 hours. We really enjoyed the signs on the side of the roads for the towns. It seemed they depicted things the towns were known for. I wish I had gotten a picture of the town with all the science stuff like beakers. Here’s one though:

When we arrived at the house we could not get ahold of the owner to check in early, so we loaded back in the van to meet everyone else at the train station. We put everyone’s luggage into the van and we all went to look for some food, except Greg, he went to get groceries.

We walked around town for a bit and I was getting pretty hangry. Finally we decided on a bar called Le Morny’s Cafe. Everyone started ordering drinks, which was a bit depressing because I could have used one. I had a croque madame which was recommended by Julie. A croque madame is like a grilled ham and cheese with a white sauce and a fried egg on top. It was delicious. Don had a cheeseburger.

After lunch we walked back to the house with Julie. Everyone else stayed behind to look around the town. Greg was at the house sitting outside and he had picked up a few snacks. He still was unable to get ahold of the owner even though it was 4 pm. Julie and I walked to the beach to check it out. It was very pretty, but with the weather only being in the 50s and 60s I don’t see it getting much use! When we got back to the house Greg said someone was coming to let us in.

The house is pretty cool. We drew names for the 3 bedrooms the couples would be sleeping in. We got a pretty sweet room. It has a giant bathroom.

For dinner we walked about 20-30 minutes to a restaurant on a boat called La Peniche. It was nice because the menu was set. We could choose from a few appetizers, main dishes, and then desserts. I had a mozzarella tart for an appetizer while Don had Foie Gras. For main courses I had the steak fillet and fries and Don had chicken with mashed potatoes. The steak was done perfectly. Dinner was very good. Don had creme brulee for dessert and I had something that reminded me of chocolate lava cake and vanilla ice cream.

The walk home was rainy and cold. I went to bed when we got back because my nose was very stuffy and I had a headache. 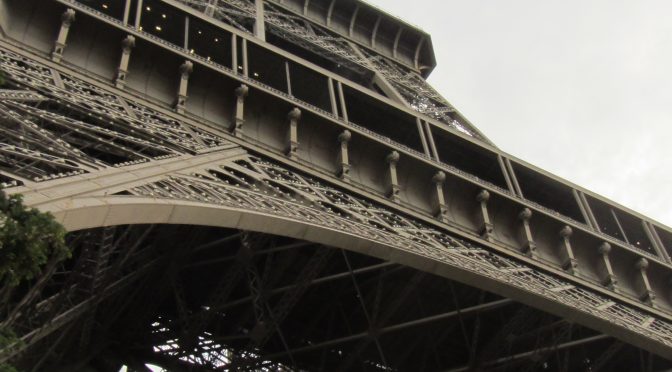 Today we woke up early and had breakfast at the hotel. We then walked to The Louvre, which was about a 15 minute walk from our hotel. I wasn’t in the best mood for some reason so I tried to snap out of it.

Once we got into the museum we booked it to the Mona Lisa. Luckily the museum was not too crowded yet and after a bit of getting turned around we found the room with the Mona Lisa. There wasn’t a line and there was a medium sized group viewing her. The room was quite sad; it was just a huge white room with construction going on. Then on the wall was the tiny Mona Lisa behind glass. We both knew the Mona Lisa was not very big, but it did just look so small and sad in this room. Tourists were pushing, trying to get the best shot of this painting that we all have seen. It was weird.

After seeing the Mona Lisa the museum had gotten much more crowded. I was thirsty so we stopped at the cafe in the museum. There wasn’t really anything in the Louvre that I wanted to see. I don’t know much about art; Don is much more knowledgeable when it comes to stuff like that. He looked at the map while we rested and found a few things to look at. The Egyptian art display was closed when we were there but that would have been cool to see. We probably walked around the museum for an hour or so but it was just so crowded so we decided to go outside.

Once we got outside we got some croissants and sat down. We sat around and people watched at various different fountains. There were a ton of birds. We even saw pigeons mating!

I think we both enjoyed the gardens at The Louvre more than being inside the museum. We walked around quite a bit and then decided to get lunch.

We found a place called Flottes. It seemed to be in a fancy part of Paris. I had chicken with mashed potatoes. The gravy it came with was awesome. Don had a steak. After we ate we walked back to the hotel and laid around.

We left around 8 for the Eiffel Tower. Greg and some people had decided that it would be cool to go up in the Eiffel Tower at sunset and have champagne. Sunset in Paris this time of year was super late, like around 9:40. We booked skip the line tickets for 9 pm. Jim, Doreen, Linda, and Donna arrived around when we did so we decided to go up because Greg, Julie, Patty, Kevin, & Laura were running late. It took a long time to get up to the top of the tower. The lines were ridiculous, even with a skip the line. I have to say I think I enjoyed seeing the tower from across the river more than actually going up it. The views were cool but often it felt too crowded to really enjoy it.

As we were going down, Greg and his crew were coming up so we decided to stay longer with them. It was fun to watch Greg since he’s afraid of heights.

Afterwards, I was pretty hungry but also tired. This just led to me being mostly grouchy, so even though Don tried to get me food, I just wanted to go sleep. 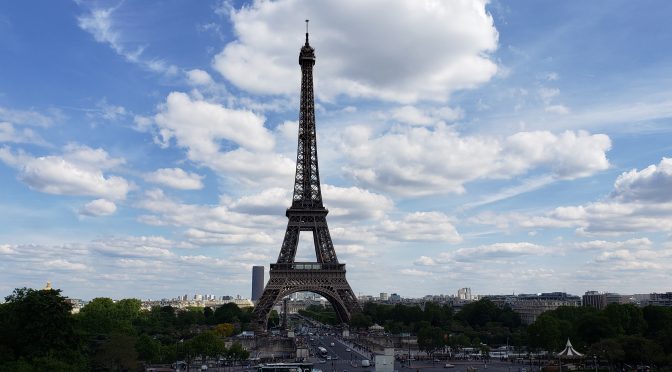 Today we woke up around 8 and had breakfast at the hotel. The hotel breakfast was pretty good–eggs, breads, meats, fruits, and cheeses. After breakfast we walked to the Musee Rodin. It was a chilly, but sunny morning and it turned out to be very nice.

The Musee Rodin has an outdoor garden with replicas of famous sculptures done by Rodin. There is also an indoor museum with a ton of sculptures. I think we liked the garden the most, especially because it was a nice, sunny morning. We enjoyed taking some fun shots with the sculptures. I would suggest getting the audiotour to learn more about the pieces.

After we walked through the museum we took an Uber to the Catacombs. We had a 1 pm tour booked and we had some time when we arrived so we stopped a restaurant called Indiana Cafe. I had a virgin pina colada and Don had a beer. We also had some ice cream for a snack.

The catacombs tour was very cool and interesting. We also had an audiotour for this tour. I would suggest doing this rather than getting a guide. It was creepy, but really more interesting than anything.

After the Catacombs tour we had lunch at a restaurant across the street called Le Comptoir. I had fish and chips and Don had a salad. The food was pretty good.

We also found this really crazy public restroom. It was all automated and even self cleaning.

After taking a ton of pictures we decided to walk the river back to our hotel and maybe even as far as Notre Dame. It was a really long walk but we had fun and took pictures. We made it as far as the lourve and then we decided we would not make it to Notre Dame. I was really tired and hungry. We found a pizza place called Positano. It was delicious, maybe some of the best pizza I have ever had! Who would have thought the best restaurant in France would be an Italian one haha?!