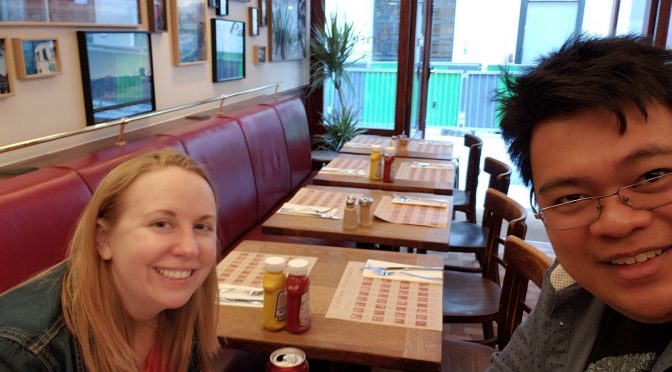 We left last night on a direct flight to Paris with American Airlines. The flight was about an hour delayed due to maintenance. On the flight I tried to sleep, but didn’t get much sleep; it was so uncomfortable. The only movie I remember watching was Vice.

We landed in Paris around 11:45 am. Finding the train to Paris was pretty easy. We made it a little more difficult on ourselves by not transferring and deciding to walk from a train stop that was a little further from our hotel. I was tired, grouchy, and hungry so this was a mistake. It was cool to see the Notre Dame Cathedral as we came out of the train though.

We got to our hotel in the neighborhood of Saint Germain around 2 pm and was able to check in. The hotel is called Hotel Des Deux Continents. Unfortunately, it is a 3 story walk up and we are on the 3rd floor haha. The staircase was tiny and winding. The room, though, was nice and cute.

We got settled in and took a 3 hour nap. Once we woke up I was ready to eat so we went out to walk around. It was cool to me how much New Orleans really looked like the streets of Saint Germain. We found a cute American diner called Coffee Parisien, which was really weird, but cool. The place mats at the diner had all of the American presidents on them, including the newest idiot. The food here was pretty good. I had a cheeseburger with fries, and they even had Dr Pepper! Don had steak and eggs, which was more like a hamburger patty and eggs. After dinner we walked around a bit and stopped at a grocery store. Then we got back to the hotel around 9 and fell asleep.