September was rough. We ended up losing our first game, but a lot of stuff happened during the loss so it was ok. We were told in the beginning of September that we no longer had the objective of Recon 1 Unknown Region; it was being replaced with Recon East Asia. We also found out we had discovered a new haven but it had not yet been accessed. Our same characters, Goods, Newt, Aofie, and Claire set out once again to save the world.

It was in this game that Package 6 came back to haunt us. If you recall we were able to put infection/city cards into package 6 so they would not be drawn. We hadn’t put too many in fear that something would happen later but we did put a few and it had been nice not having to worry about these cities anymore. Well now when an epidemic occurred we had to draw a random infection card from package 6 and remove any cubes if any.

We knew from the beginning of this game it would be nearly impossible to achieve the goal of reconning Asia. We did search Khartoum and this card allowed us to give a player card to another player. We connected 2 new cities: Dar Es Salaam and New Mumbai. The new haven was also accessed and named Aang. Even though we lost the game we did keep a permanent supply center in Kolkata to make it easier to recon Asia in the next game. With our other points we increased the population in Tripoli and Istanbul. We also used a Foundations upgrade on a Washington city card to make it count as 2 cards of its color to build a supply center.

In the second game in September we had 2 rationed event cards. We used the One Quiet Night and Drastic Measures. Goods used the unrationed event card called Renewel which allowed her to gain a character upgrade worth 2 points or less. She chose Soldier so she can now discard a city card matching the color of the city she is leaving to prevent exposures from Hollow Men. We were able to recon Asia. Reconning Asia connected Jakarta to the grid. It also added 4 more Hollow Men cards to the infection deck. Claire searched Dar Es Salaam twice and was able to draw a free supply line from there. The other search from Dar Es Salaam showed there was a lost haven near there but we had already found it and accessed it. September did give us another unrationed event called Biodome Prototype, which allows us to place up to 3 shelters onto any cities on the grid. We have discovered shelters now to help prevent exposures for characters. To place a shelter you have to discard a card matching the color of the current city. It is nice to have some ways to prevent exposure now.  We also used the frequency scanner a lot to try to avoid epidemics. It actually worked a couple of times!This game is getting crazy. 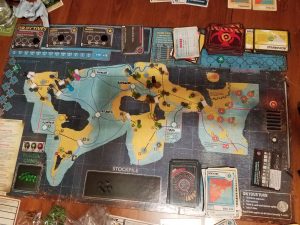