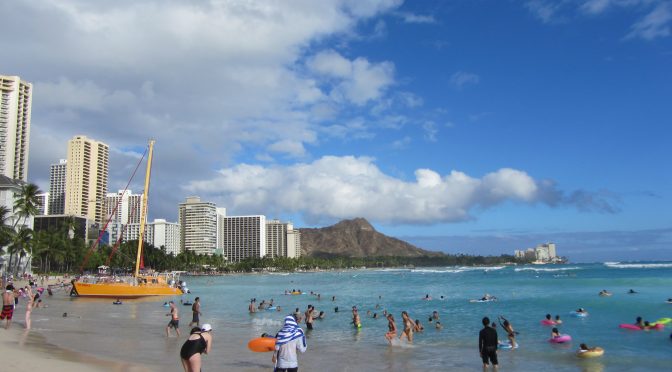 We left this morning around 7:30 am for our 10 am flight to Honolulu!! Our flight was direct on United so that was pretty cool. Only thing not really cool were our options for eating in the United terminal so we ended up having Mcdonald’s for breakfast. I can’t really complain at all about the flight itself though; it was on time and we had 2 seats by ourselves! Don also really enjoyed the cell phone/tablet holders on the back of the seats. I spent most of the flight watching The Sinner that I downloaded from Netflix. Pretty good show, I recommend it! 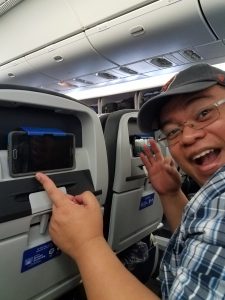 We arrived in Honolulu around 2 pm local time and took a cab to our hotel in Waikiki, Hilton Garden Inn Waikiki Beach. Fortunately, we had enough Hilton reward points to stay here 2 nights for free. The hotel was nice and really modern looking. It also had a nice store attached to it where you could get coffee and some groceries.

Once we got settled in we decided to find some food and walk around a bit. There was an area with a bunch of food trucks right next to our hotel but it looked like many of them were shutting down for the day. We decided to walk towards the beach to eat. We walked around the beach a bit then we ate at Duke’s Waikiki. It seemed touristy but so did everywhere around here. Dukes had a nice view and live music. We ordered the fried calamari to start along with some Longboards. Don had a cheeseburger and I had the Korean steak tacos. The calamari was pretty good and the tacos were ok. The steak in the tacos was really good. Mostly if you’re going to eat at Duke’s you’re paying for the location and view. I wouldn’t really recommend the food.

After eating we walked along Waikiki Beach and watched surfers. It rained for a little bit, but it was still beautiful! 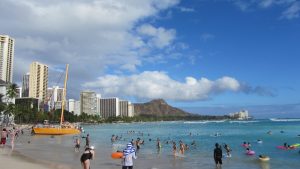 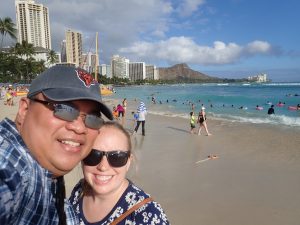 Before we went back to the hotel we stopped at the grocery store across the street to pick up something for breakfast since we will have an early morning for a snorkeling excursion. The Food Pantry grocery store was pretty awesome. It had a little cafe in it and almost like a small food court. They also had many pre-made meals you could pick up. We got some chicken katsu and rice. We also got a few musabis, Musabi is spam and rice wrapped in seaweed. It’s like a small sandwich almost and it’s a pretty common Hawaiian snack. It sounds not so great but they are pretty good. We ended up falling asleep around 7:30 pm because of the 5 hour time difference.