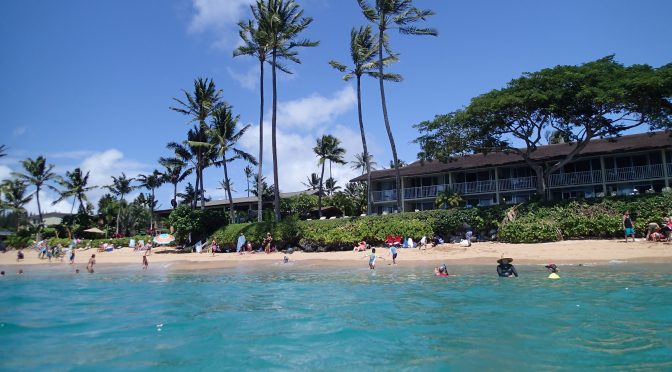 This morning we were up early again for our 8 am flight to Maui. We took a cab to the airport after raiding leftovers in our hotel fridge. Our flight with Hawaiian Airlines was on time and it was so short!  I couldn’t believe we were served drinks on this flight because it was seriously like 20 minutes. We were up in the air at 8 am and landing around 8:20. The views on the flight were awesome. 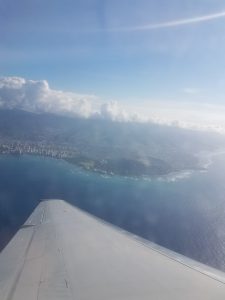 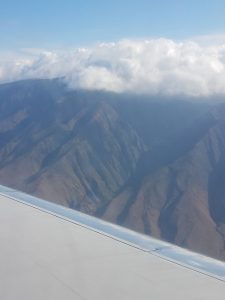 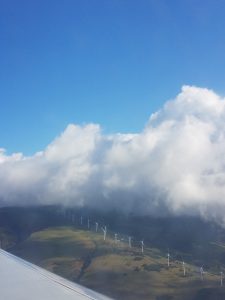 Once we landed we had to pick up our rental car. The lady at Hertz wasn’t very helpful and she was kind of rude but we were in and out of there quickly. We had planned to drive straight to our condo in Napili and find something to eat along the way. About 10-15 minutes into our drive a light came on in our Nissan Sentra. The light was something about the emergency braking system, so Don called Hertz to ask if we should come back and they told us to. Once again we were in and out of Hertz quickly and our help there was a lot nicer. We went from a Nissan Sentra to a Nissan Altima, both felt like giant boats.

Since places were now starting to open for lunch I decided we should try a place that was recommended to me by Julia called Tin Roof. It was really busy and really nowhere to sit. We ended up sitting outside on a parking curb because that’s where other people were. I ordered the steak bowl and Don got the chicken bowl. We had a side of the pork belly. Everything was really good and I would recommend checking it out if you need a good place to eat near the airport. 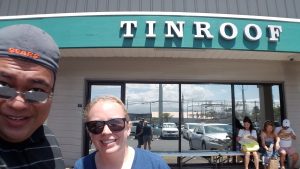 After eating we started driving. I was surprised by the landscape; Hawaii seemed a lot more dry than I had expected, but it was beautiful. We arrived at our condo around noon and we were able to check in early. We are staying at Napili Sunset, which is in Napili Bay. The place seems nice, a little overcrowded with a lot of furniture but nice. 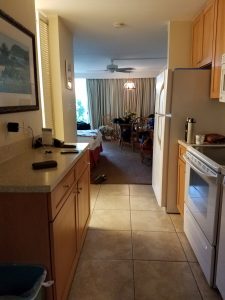 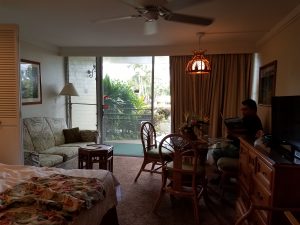 After settling for a bit we decided to check out our beach. We had to walk across the street but it was only about a 5 minute walk, if that. The beach was beautiful. There were a lot of people snorkeling, swimming, and boogie boarding. We decided to snorkel and we went pretty far out. There were a lot of cool rock formations and schools of fish. We were on the left side of the bay looking at the rocks when a giant wave crashed into us. It startled us a bit and we swam quickly away. When we got to calmer water we saw a turtle! I had read that you’re very likely to see turtles while snorkeling in Maui but I didn’t think we would be lucky enough to see one on our first day! It was cool, but it didn’t stay around for long. After this we decided to just relax in the water for awhile and float around. Then we came back to our place and checked out the pool. The water was extremely warm. 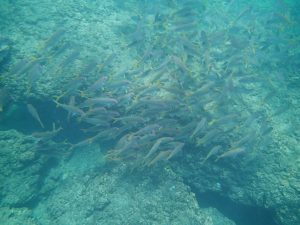 After the pool we were getting hungry so we decided to check out Teddy’s Bigger Burgers in Lahaina. We had seen this place on a guy’s YouTube video about affordable, good places to eat in Maui. The menu at Teddy’s was a bit confusing because they have a lot of options.  We each tried a burger and after ordering one of their special ones I saw I could have just had an original one. That was a bit disappointing because it felt like they were pushing you to pay more and try one of their specialty burgers. The burger was good. We also tried fried pickles. Everything was good here and I would go again but just try their straight up burger. I can’t even remember which ones we ordered, but since we ordered a specialty burger it felt expensive. 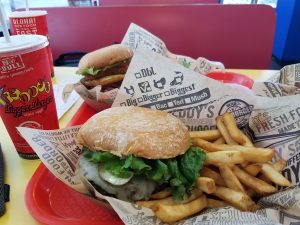 After dinner we wanted to pick up some food for the condo so we went to a Safeway but we couldn’t find everything we wanted because it was under construction, so we went to a Food Land and a Walgreens. After getting some stuff we drove around to try to get a view of the mountains in the area. We did take a few pictures and the GPS took us through a neighborhood, which was kind of weird. Overall it was a pretty good first day in Maui. 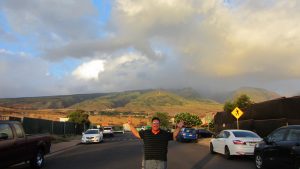