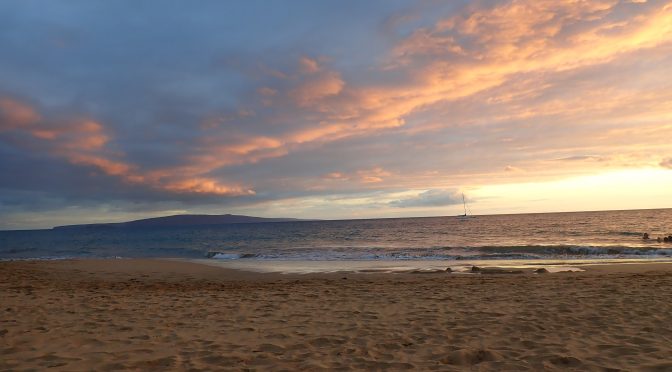 Today we got up a little early so we could check out of Napili Sunset and make our way to Kihei. We had breakfast again at Slappy Cakes. I thought about ordering something different than yesterday but I couldn’t do it. I had the carnitas benedict again, but Don tried something new- the veggie omelet. I love Slappy Cakes!!

After breakfast it was time to check out some beaches again! The first beach we checked out was Airport Beach, also called Kahekili Beach Park. There was a strong current, so we went South so we could float North. It was a very pretty beach and the snorkeling was good. There were a lot of people snorkeling and even some scuba divers. The coral was beautiful. I spotted a turtle and we watched an eel for a long time. I’ve never seen one stay out so long. 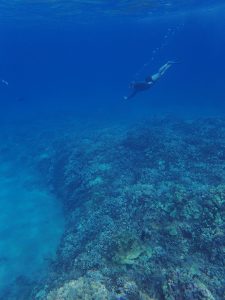 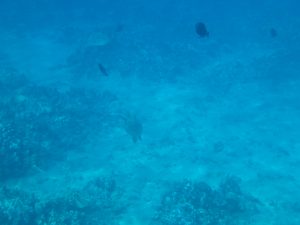 After we were done snorkeling here I had a weird conversation with a woman about a bird. While in line for the restroom this woman started telling me how she just got an awesome video of a bird eating nuts from her hand. I was like that’s cool, but she just kept talking. She wanted to know how she could upload her video to YouTube so she could get “all the credit for it”. She told me about a guy who uploaded a video of a lemon rolling and it had over 40 million views. Then she told me she needs to upload it because she only has 4 GB’s of storage on her camera but she doesn’t have a phone. I told her she could use a computer to put it on the internet and her response was “maybe at the library?”. It was a weird conversation, but basically ended with me telling her to make a YouTube account and upload her video at the library. Maybe she will go viral?

Next we tried out Black Rock Beach. We were able to park in a parking garage here. We made our way to the Black Rock and it was pretty crowded with snorkelers and swimmers. The rock was pretty cool and people were jumping off of it into the water. The current around the rock was strong. We went around the rock and started heading towards what looked like a cave. The rock formations were so cool underwater but as I got closer to the cave it felt too dangerous so I quickly turned around. When I turned around there was immediately a giant sea turtle in front of me! I swam with it for awhile, navigating around the rocks. It was difficult to swim here because of the rocks but it was pretty awesome. Pretty good snorkeling day once again. We have seen turtles every day here in Maui! 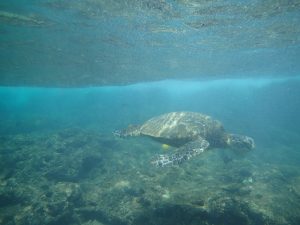 Once we were done at Black Rock we made it back to the car to make our way to Maui Coast Hotel in Kihei. We stopped once along the way to take some pictures. 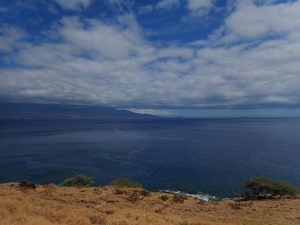 We checked into the Maui Coast Hotel and it is really nice. It has a resort feel. After getting cleaned up we decided to get some food. We tried a place we saw on YouTube called Da Kitchen. The food here was soooo good!!!! Best dinner so far!! Don got the luau special and I got the plate with katsu chicken and luau pork. Absolutely delicious. We even tried some of their chocolate pie. After dinner we walked around the shops here for a bit and then we tried the shaved ice place that was in the parking lot. The place was called Beach Street Maui. I didn’t really know what to expect from a shaved ice. I have had sno cones before but this was completely different. We shared the Firecracker. It was blue raspberry, pina colada, and strawberry with ice cream and haupia. Haupia is like a coconut syrup. This shaved ice was so good, so refreshing. 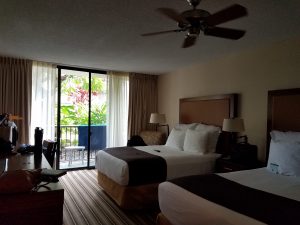 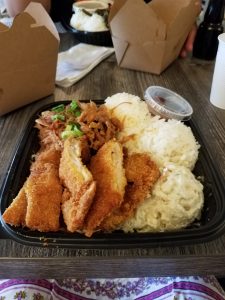 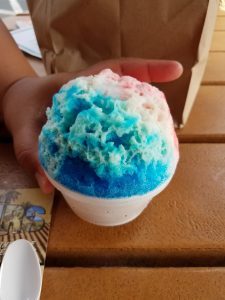 After this delicious dinner we went to Safeway to get things for our trip to Hana tomorrow. We hurried back to the hotel to watch the sunset at the beach across from our hotel. It was beautiful. And of course we ended the night watching Big Brother haha. 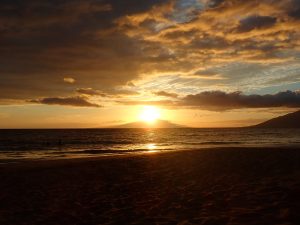 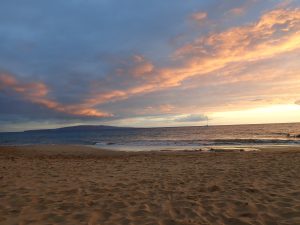