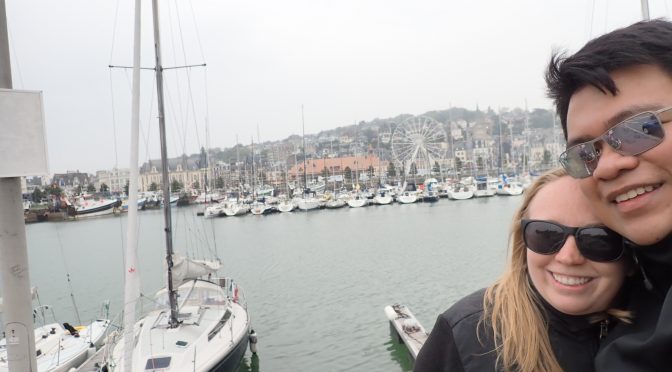 Today we slept in until about 9:30 and that was nice. We had some toast and eggs and decided to go out on our own to look around the town around 11. We walked around Deauville. I got a giant pack of travel tissues at a pharmacy because I think I have picked up a cold. The weather does not help because it’s pretty chilly and dreary!

We found a farmer’s market and got some mushrooms and tiramsi. We also saw Greg and Julie here.

For lunch we stopped at a place called La Morny-pizzeria and creperie. I had a pizza with ham and Don had a galette. A galette is a type of pastry made from buckwheat flour. Think of it like a savory crepe I think. It was a pretty good lunch.

After lunch we did some more walking towards the river/canal. On the other side we could see more buildings and a ferris wheel. It was getting colder and raining more so we were thinking of going back, but then we saw a water taxi that would take us across so we thought we might as well check it out!

The water taxi was only a couple euros. On the other side was the town of Trouville. There was a pretty cool fish market right when we got off the taxi. Trouville was really cute. We stopped at a place called Les Artistes for a cappuccino. It was like a French hipster bar.

After hanging out out here for awhile we walked back to the house, it was around 4 pm. Don decided to take a nap while I socialized a bit in the kitchen. Kevin was making white trash punches for Greg and it was pretty funny.

We had to leave for dinner around 6:30 pm. We were planning to take the water taxi over to Trouville, how weird! When we got to the river though the tide had went out and the water was so low! You could see the bottom! So crazy considering a few hours earlier the water was super high. There was a temporary bridge we could use to walk across to the other side.

We had some time before dinner so we walked around with Greg and Patty. We saw our first cats of France here!

We ate at a creperie called Le Vieux Normand. Here we had fondue and crepes, both things I haven’t really had before. This place was also known to have many local ciders. The fondue was interesting and unique. There were savory crepes and sweet crepes. I was really craving a sweet one so that’s what I got. Don had a savory one with salmon. It was a nice dinner, so far French food though has not been my favorite. It is kind of a bummer that I can’t partake in the wine, some cheeses, and some meats. Oh well! Hope baby is enjoying his time in France!

We walked back to the house after dinner. It’s so crazy because it stays light out here right now until around 9:45 pm. We hung out for a bit then went to bed around 11.