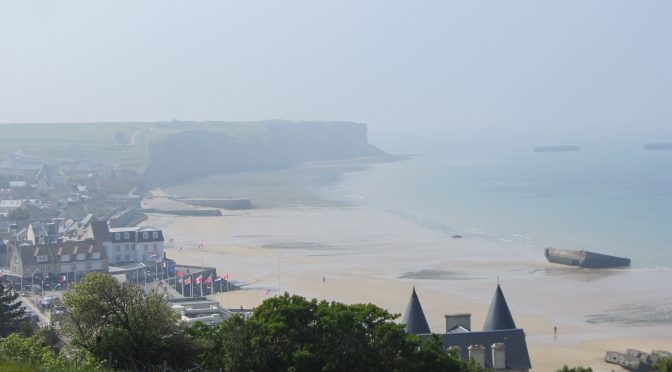 Today we got up around 7:45. I made some eggs to share and had some toast and coffee. We were preparing to go on our tour of Normandy. Our bus came to pick us up at 9:45. The bus was really nice and it had wi-fi. The driver was very nice too and knowledgeable about everything.

It was about a 2 hour drive to our first stop the German cemetery. The cemetery is located near Omaha beach and is maintained by Germans today.

Next we stopped at Pointe du Hoc. Pointe du Hoc is on high cliffs of Normandy and it was occupied by the Germans until the U.S. army scaled the cliffs on D-Day and captured it. Now there is a memorial and a museum there. You can also still see and go inside some of the original fortifications and bunkers. There are also still bomb craters to see. It was an interesting place to see and the cliffs were very beautiful.

Next we had lunch. Don had a galette and I had fish and chips. At one point during the meal Greg took a mayo packet, opened it, and sucked out some mayo. I forget what prompted this, maybe the fact we didn’t have a lot of mayo. An older French couple saw this happen and they just looked appalled. We had a good laugh though. I stole a mayo packet to give Greg a snack on the long bus ride home.

After lunch we checked out some intact German bunkers. That was pretty cool to see.

The last stop on our Normandy Tour was a lookout over the false harbor that was created. The British engineered large concrete pieces to create a port or false harbor to help move supplies and men to and from ships. They even purposely sunk some older ships to help create the harbor. The false harbor was essential in the Battle of Normandy.

It was a 2 hour drive back home and everyone seemed tired. When we got back Jim, Doreen, and Don watched the series finale of Game of Thrones. The rest of us just relaxed, sat outside, and talked. It was a nice, sunny afternoon. We had dinner at 8 at an Italian restaurant called Il Parasole. This was super exciting for me because I love pizza and Italian food way more than French food haha. We were able to pick out an appetizer and pizza or pasta, then a dessert. I had calamari with a diavolo pizza, which is basically pepperoni with peppers. I had ice cream for dessert. I am blanking on what Don had right now but we both enjoyed our meals very much! Best food so far in Deauville.