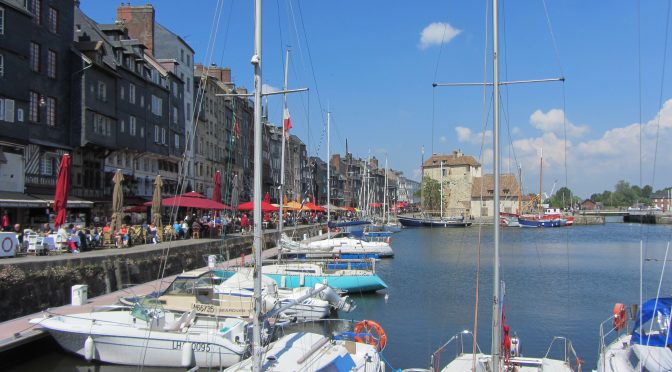 Today was scheduled as a free day. Most people decided to take a bus to the town of Honfleur. We wanted to do that also but we woke up really, really late–like between 9:30 and 10. Everyone else was pretty much out the door when we got up. They walked to the train station for the 11:05 train. The next train to Honfleur after that was around 1 pm and the train back was around 4 pm so if we wanted to go we needed to hurry.

We were determined to make it to the the 11:05 train. We got ready super quick and we took an uber to the train station. The line to get tickets was making me a bit nervous because we arrived around 10:45, but we got the tickets and met the others in line. Many jokes were made between us and Kevin pertaining to The Amazing Race. We were the last team to arrive but we definitely were not out!

The bus ride was around 30 minutes. Honfleur is small, cute harbor town. We walked around looking for food and decided to eat at a place right on the water called Le Marin. Here we tried escargot. It actually was pretty good. We also had croque madames. It was funny, while we were sitting at this restaurant we saw almost everyone in our group. They would walk by and we would call out to them. It was like we were seeing someone we hadn’t seen in awhile.

The day was absolutely beautiful, the warmest day so far here in Normandy. We met up with Greg and Patty. They had drove to Honfleur after visiting the town of Bayeux. We walked around a bit and did a little shopping. Then we split up again. I was wanting a snack before we had to leave so we went back to the water and found a restaurant called 42. I had a cappuccino and ice cream. Don had a beer.

We walked slowly back to the bus station for our 4:15 train. This time we were the first to arrive. I’m really glad we made it to Honfleur because it was such a cute little town. Once we got back to the house we prepared a dinner to have outside. We worked on cleaning the tables and chairs, then we relaxed a bit outside since it was so nice out. Dinner was great. There was chicken, salad, green beans, potatoes, and a tart for dessert.

It was getting chilly so Don started a fire for warmth in the grill area but there wasn’t much to burn. We walked to a gas station to get firewood. After hanging out for awhile I was pretty tired so I went upstairs to bed.