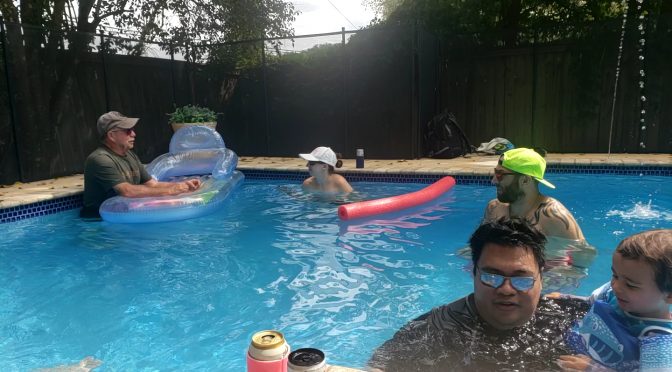 Lucas woke up so early today, around 5:30. We got him to stay in bed until around 6:45. Once we got up and were trying to get out of the house Lucas was throwing crazy tantrums. He got his toys taken away and then he cried and screamed all the way to breakfast. It was about a 15-20 minute drive. I have never seen him have a tantrum this bad.

We had breakfast at Snooze. I love their egg benedicts. Lucas got out of his fit and did good here. After breakfast we went over to The Pearl Farmer’s Market. It was a nice day to walk around and Lucas got to play in the splash pad.

After the farmer’s market we went back to Kelsey and Jared’s and Lucas had some mac and cheese. He had a rough time going to nap and it was also a rough time after nap when we tried to get ready to go to the pool. Today has really been a struggle.

Kelsey had reserved a pool on the app Swimply. It was pretty cool. It’s a cool concept that people can rent out their pools while they are not using them. Lucas was swimming around really well.

On the way back to Kelsey and Jared’s we ordered some Mexican food from a place called Tito’s. We ate outside on the deck. The food was so good!! The queso was awesome.

After dinner we went on a little walk around the block a few times.