We woke up this morning and had breakfast at the hotel. 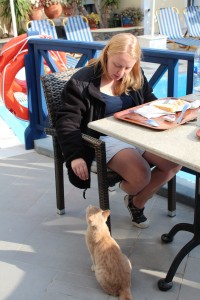 We made sure we were all packed then we waited for the bus to come to take us to the port. The bus came and went to several different hotels and drove us to the port. The drive was crazy because the port is at the bottom of the island so we had to drive down a cliff. We had a snack of Greek fries and a coke before getting on the ferry.

The ferry to Mykonos was about 3 hours. We left around 1230 and Don and I were separated. We were in the same row but there was a giant space between us.

I made friends with a couple I sat with, Michelle and Stephen. They were from NY. They were traveling with some friends. They were pretty cool. The first half hour of the ferry was fine but then the waves got huge and the boat was just rocking. It felt like sometimes the ferry would flip over. One of the workers started passing out extra puke bags. Tons of people were puking and the waves were just constant. I was feeling horribly sick, but I wasn’t alone Michelle was also. We didn’t puke but it was completely horrible.

When we finally got off around 4 our tour guide took us to the bus to take us to our hotel. Then he told us he would be at our hotel around 450 to talk to us. When we got to our hotel there were only stairs leading up to it. We were with a bunch of old people so they were not very happy about this. We got to our room; it was room 42. The hotel was very nice, it was called Hotel Despotiko. We walked around the hotel grounds and it was very pretty. Better than the one in Santorini.

We met with the tour guide to talk about Mykonos. Then we went to walk around Mykonos City. We decided to upgrade our 5 hour ferry ride to Athens to a flight. I just couldn’t do the ferry again. Plus the flight would leave at 11, and the ferry wouldn’t leave until 2 pm and take 5 hours, so we would have a little more time in Athens. Don liked the idea of the flight also. So now we have a 40 minute flight to Athens so hopefully all goes well.

We had dinner at a place on the water and watched the sunset. The sunset was absolutely beautiful. 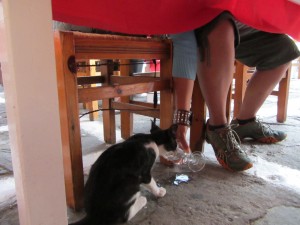 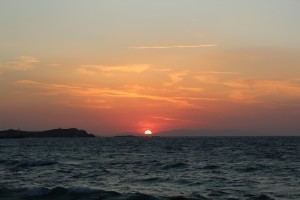 Then we just walked around and took a lot of pictures. Mykonos was very pretty. I was still feeling dizzy all night from the boat. Here’s some of our best pictures from Mykonos city and check out all the cats I met! 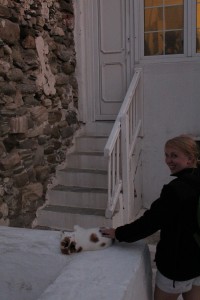 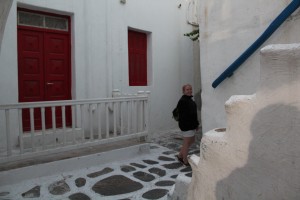 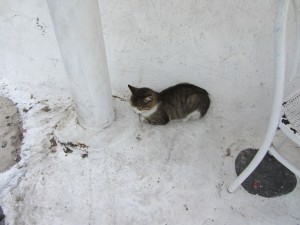 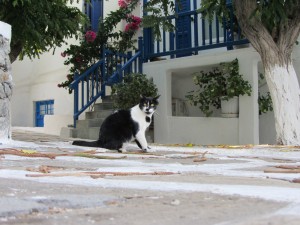 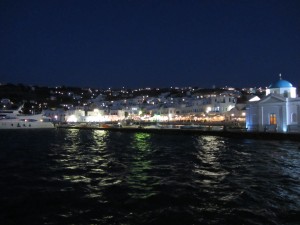 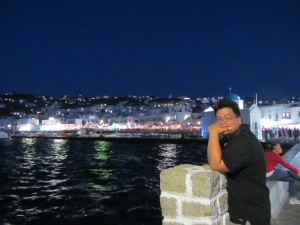 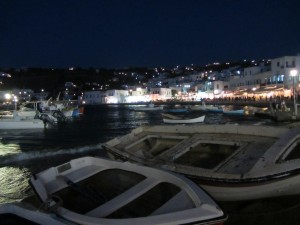 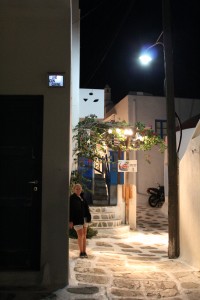 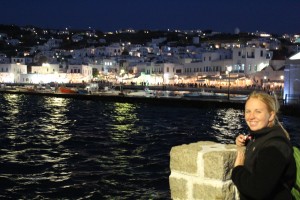 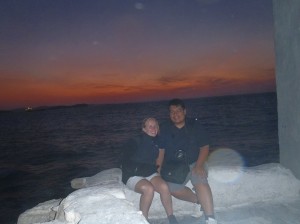 We came back to the hotel around 9. We got some water and watched a little TV, since the TV in our last hotel didn’t work.